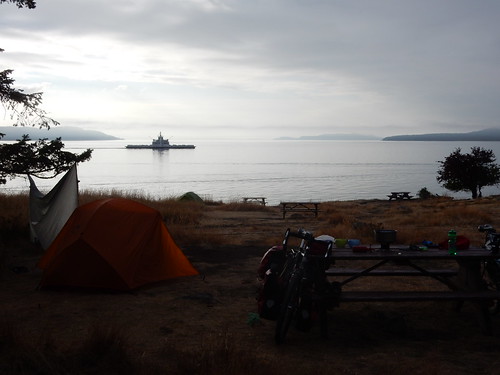 From Vancouver, we took transit to Tsawwassen ferry terminal for an early crossing to Swartz Bay. We rode Lochside and Galloping Goose rail trails to Sooke, Highway 14 to Port Renfrew, Pacific Marine Road (recently paved logging road) to Lake Cowichan, Cowichan Valley Trail and Indian Road to Duncan.  We rode the old Island Highway north toward Ladysmith until our only option was the Trans Canada. After visiting friends, we took ferries from Crofton to Vesuvius on Saltspring, Long Harbour to Sturdies Bay on Galiano, Sturdies Bay to Otter Bay on Pender, and Otter Bay back to Tsawwassen on the Mainland.

Route around Vancouver Island and Salt Spring Island.
For clarity, routes on Galiano and Pender Islands are not shown.