Riding Home from the Rockies

We took the overnight train to Jasper, and stayed one night in Jasper. We then cycled home, using side roads as much as possible, arriving tired after a 950 km ride in just over a week. 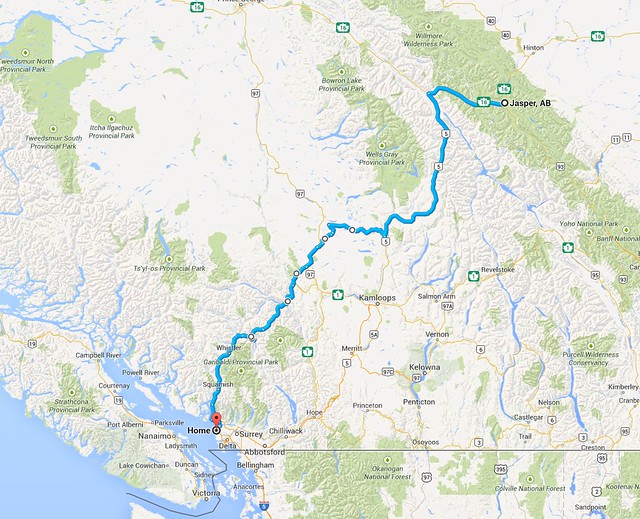 Jasper-Little Fort (Yellowhead Highway (Highway 5)) The Yellowhead pass at 1,131 m is only 69m  metres above Jasper townsite, and the downhill ride to Little Fort takes three and a half days, so neither the uphill or the downhill aspect of the ride was obvious. The valley is wide and some snow was still present in the ditches. We quickly found that tourist traffic was low because it was not yet the May long weekend, but this meant nearly everything was closed. We had clear skies on the first day and so the mountain views were great. We stayed in Clearwater two nights for a rest day and to visit relatives. 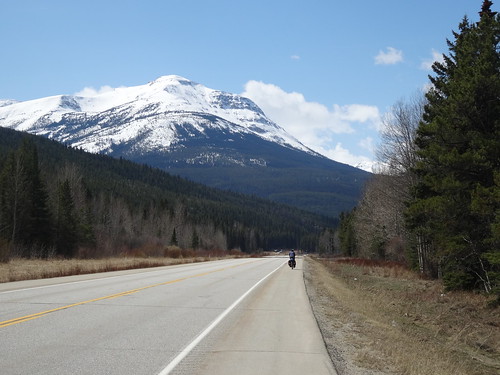 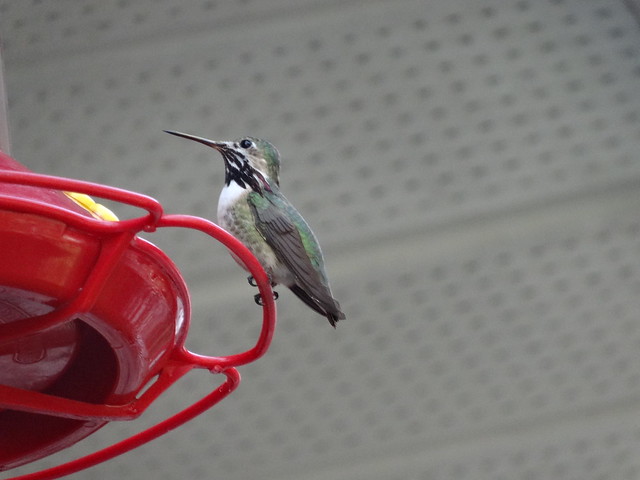 Little Fort – Lone Butte (Highway 24) Little Fort is at  681 m,  “MacDonald Summit”, the pass on highway 24, is at 1311 m, the climb is made in 10 km of average 6% grade with an extra 3 km of less steep grade at the top. We had our late lunch at the top. This is ranching country. We had trouble finding water and the campgrounds were closed, so we camped behind a building on a community playing field that had a water outlet. Next morning, at the only coffee shop for many miles, we were amused by local news exchange among retired ranchers. 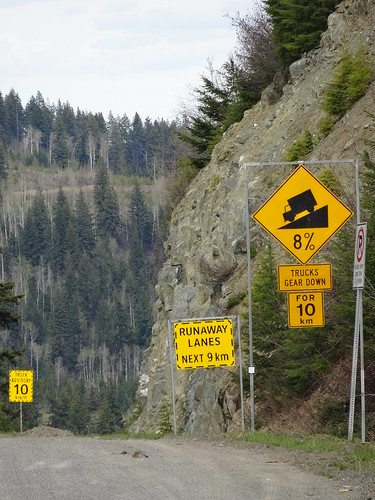 Lone Butte – 70 Mile House (small paved roads) We had been hoping to stop and spend a day horse riding,  but everywhere was closed. We saw a sign at a ranch offering rides, but nobody was home so we took our lunch in their driveway. At the end of lunch, the owner and two young European lady wranglers arrived and we went off for a few hours ride. Actually much of it was more like bushwacking through logging slash on a horse. Great supper and breakfast at the ranch and we set off refreshed, passing by the Flying U Ranch on our way to 70 Mile House. Beautiful ride on small roads. 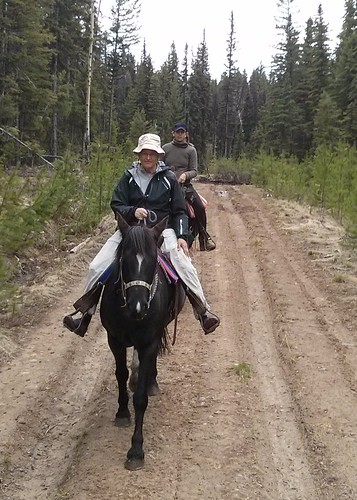 70 Mile House – Clinton (Cariboo Highway 97) Not a very pleasant ride although the good hard shoulder made it reasonably safe.

Clinton – Pavilion (steep climb, small roads, much unpaved) We left Clinton in late afternoon using a small paved road that followed the same general direction as the rail line. We planned to stay at the Downing Lake provincial campground. This proved to be under about 6 inches of water, so we camped in the picnic shelter at the picnic area next to the sign saying “no camping”. Next day, we passed through a washout near our campsite then up a steep hill on unpaved road. We got up into snow, although not enough to cause any problems. 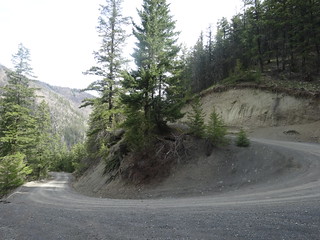 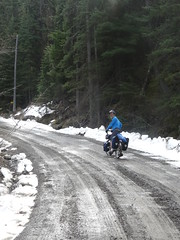 The summit was probably the highest we did (at an unconfirmed 1,520 m) on the trip.  The ride down was the highlight of the trip, with views of the Coast Range while the road passed through sage brush and juniper with arowleaf balsamroot (Balsamorhiza saggittata) in full bloom. 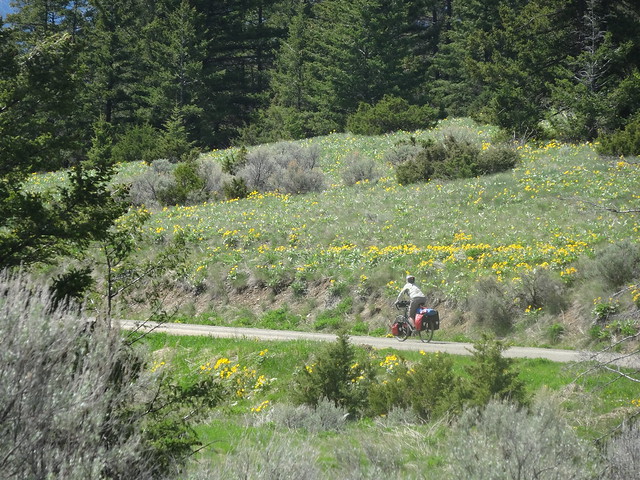 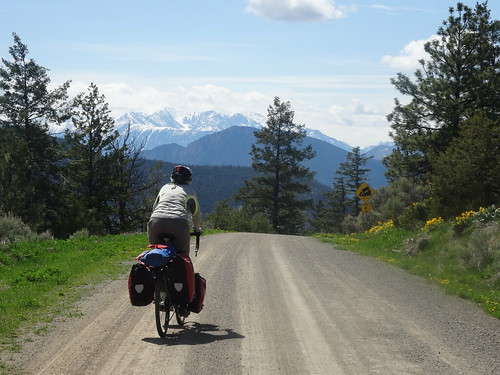 Pavilion – Vancouver (highway 99) (with an 8km detour down Lillooet Lake, and 10km on rough steep mountain bike trail “sea to sky” south of Whistler) Pavilion to Lillooet was a hot ride and we stopped at a stream under cottonwood trees for a rest and to wait out the heat of the day. We had a large supper at our favourite Greek restaurant in Lillooet. The BC Hydro campsite at Lillooet was closed, and we could see a long queue of vehicles at its gate waiting for its season opening the next morning. We slipped discreetly down the embankment, finding the campground quite ready for use, leaving at 6 a.m. and stopping for breakfast at the first pullout. This provided a fantastic view down Seton Lake in the morning light. 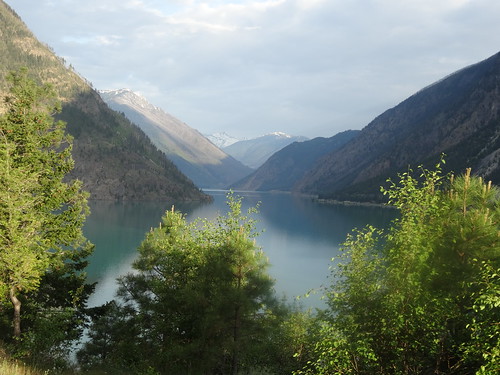 We finished 95% of the climb to the Duffy Lake Road summit (1279 m) before stopping for second breakfast and coffee by a rushing river. 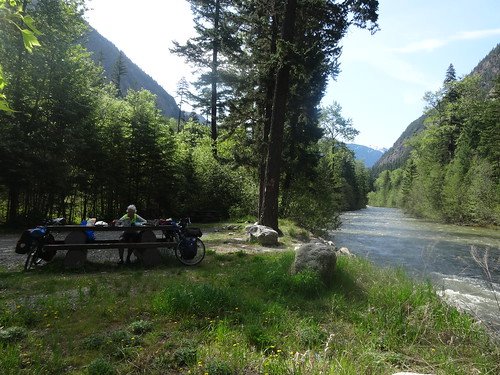 Rivers in full flood during  snow melt season were the hallmark of this trip. The drop from the pass to Pemberton is an exciting 10 km at up to 13% grade. At the bottom, we turned south along Lillooet Lake, but after 4 km of eating dust and being shaken by the gravel surface we came to our senses, turned round and rode into Pemberton where we collapsed into a hotel with a hot tub in. In the morning we climbed our last pass from Pemberton 210m to Whistler  675 m. In Whistler we joined a nice paved bike path “Sea to Sky Bike Route” that snaked through the town, but at the Olympic Village it changed into a steeper, twisting mountain bike route. We found this difficult on our fully loaded bikes! At the first opportunity (10km later) we switched the highway 99, which has a good hard shoulder but lots of traffic because it was the May long weekend holiday. It was getting late for supper as we rolled through Squamish, so we went into Wendy’s and quickly demolished double bacon cheeseburger combos. We camped with the climbers at the foot of the Chief in our first official camp ground of the trip that was actually open. 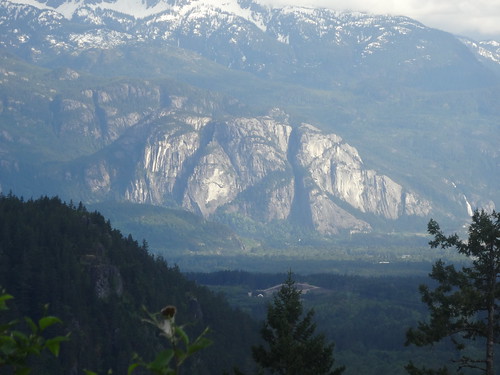 The next day was, for this trip of 100+km days, a relatively short day’s ride home.

Jasper to Vancouver by an Interesting Route 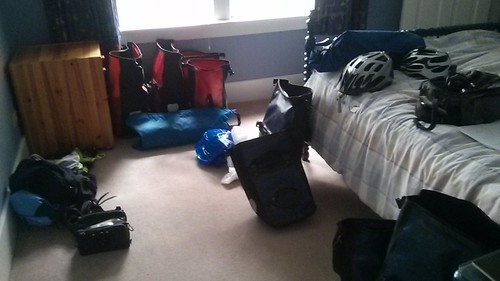 This evening, we’ll catch the train to Jasper, Alberta. Catching a train is much easier than an airplane: the bikes go in a big box so only the pedals need removing and the handlebars turning. Tomorrow afternoon we’ll arrive in Jasper, and on Thursday morning we leave Jasper to travel west and south. Last week, Canmore (300km SE of Jasper) had a big snow fall, but we understand the road is clear… but clearly leaving much earlier would have been risky. We have a plan A route, but there are so many alternates I will not describe them here. Just to say it is about a 900 km ride, through some of the most scenic countryside in the world.