2018/05/31-06/01: In Saskatoon
Some of the key events of the 1885 Northwest Resistance took place just NE of Saskatoon. The winds would have been in our faces, and our bodies were in need of rest, so we rented a car for the day and drove to Batoche, a National Historic site. After watching an informative film which explained this key part of Canada’s history, we walked to the church, rectory, and historic graveyard. Still digesting our impressions of the challenges of early Metis life, we stopped at Tourond’s Coulee in our way back to Saskatoon. This was the site of an early battle during the Resistance. 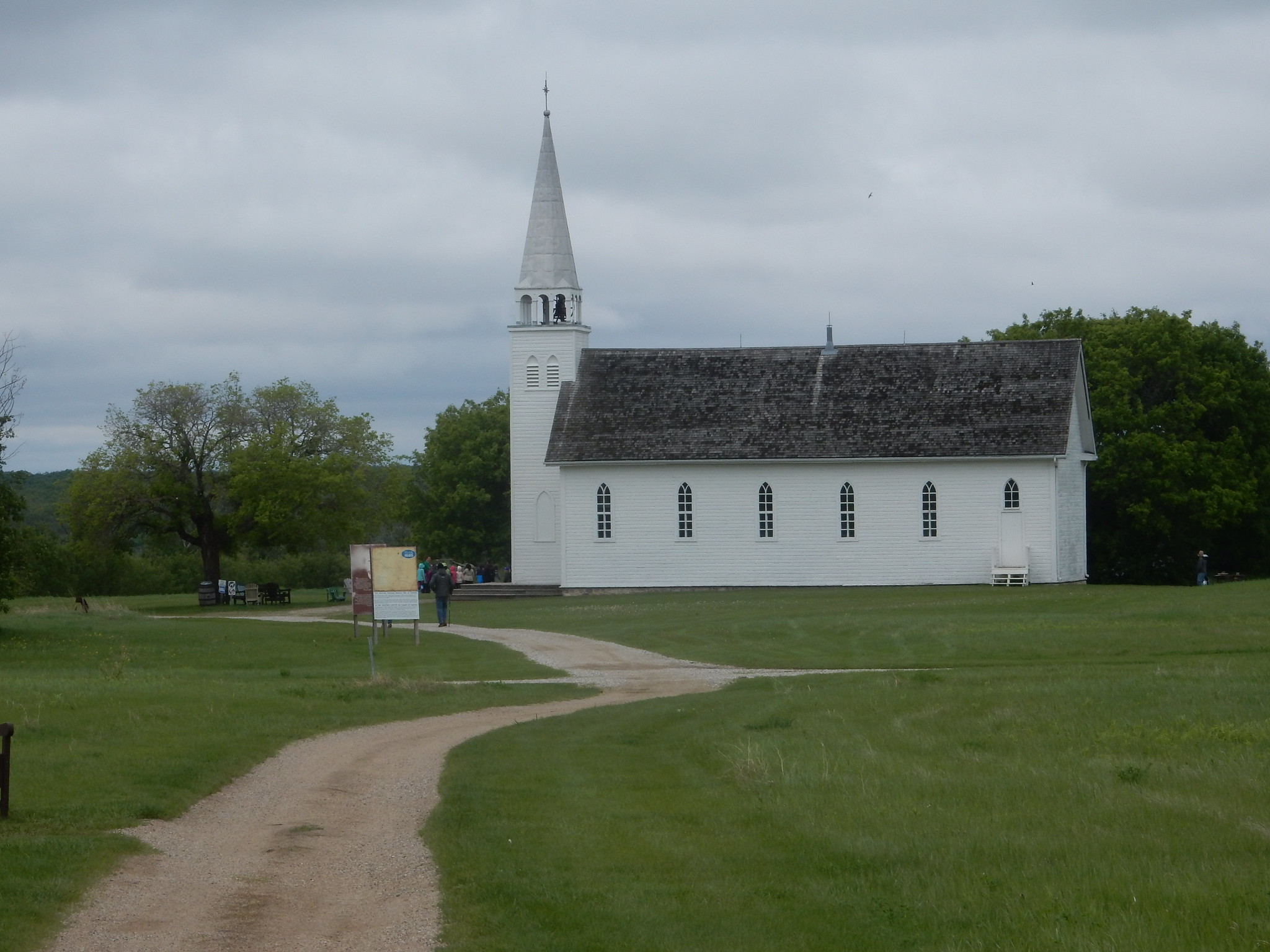 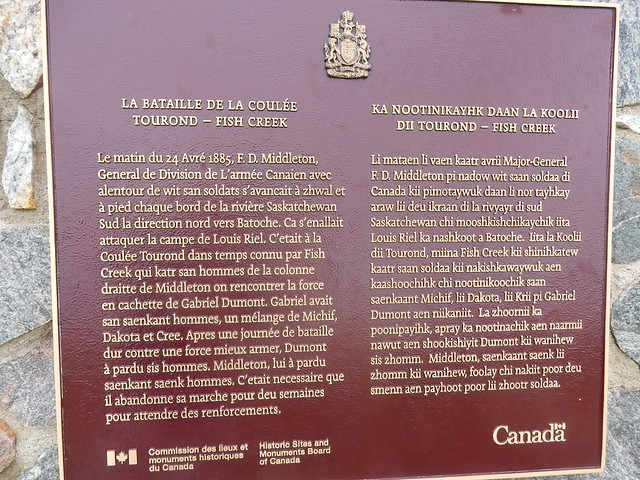 This plaque at Tourond’s Coulee is in Michif, the Metis language, and what I believe is Cree. A plaque on the other side of the cairn is in French and English.

A few days earlier, we had visited the Northwest Mounted Police Post in Battleford, where we glimpsed the early days of the European settlement of Rupert’s Land from a different viewpoint.  “Rupert’s Land” refers to the vast area of what is now mostly in Canada, and where the Hudson’s Bay Company held a commercial monopoly from 1670 to 1870. We’d bought our National Parks passes here.

2018/06/02:  Lanigan 130 km
Before reaching Lanigan, we saw various box or tent-like structures, placed in fields. We wondered what they might be. Lanigan is home to a large potash mine, and we  at the associated interpretive centre which had agricultural information as well. I learned that the structures we’d seen probably housed prepupae of alfalfa leafcutter bees which are essential to good pollination and seed setting for alfalfa crops. I was told that Saskatchewan produces the bees for export to other areas where alfalfa is grown, but have yet to learn more about how the production is done. 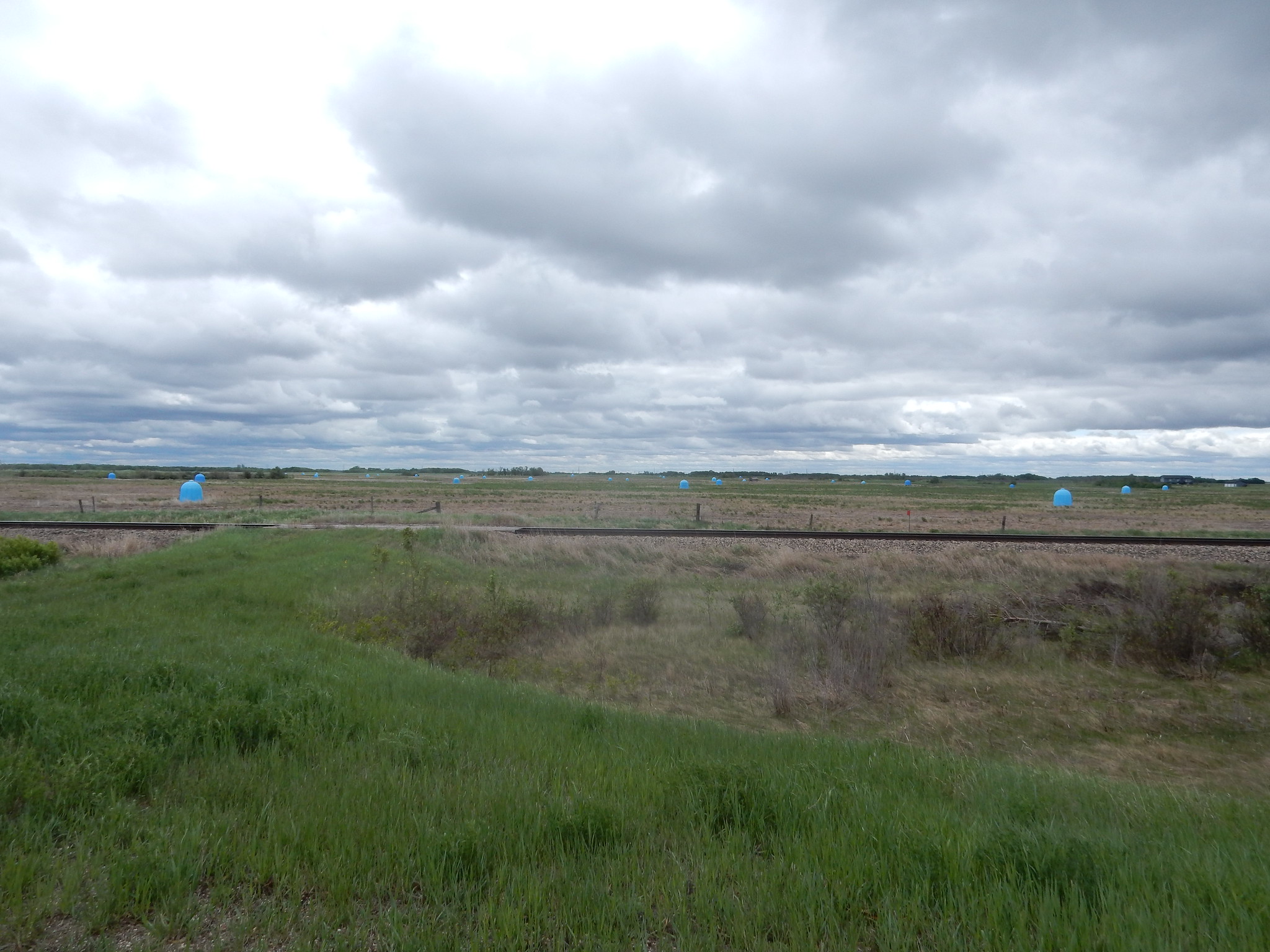 2018/06/03:  Foam Lake 119 km Airstream
Today we must have moved from the central to the Mississippi bird migration flyway.  We began to see new bird species, including herons and American white pelicans. They must have had wet weather recently, because at times our road seemed like a narrow dry strip across vast expanses of shallow water. Further along was the expanse of Quill Lake, an internationally important area for bird life. 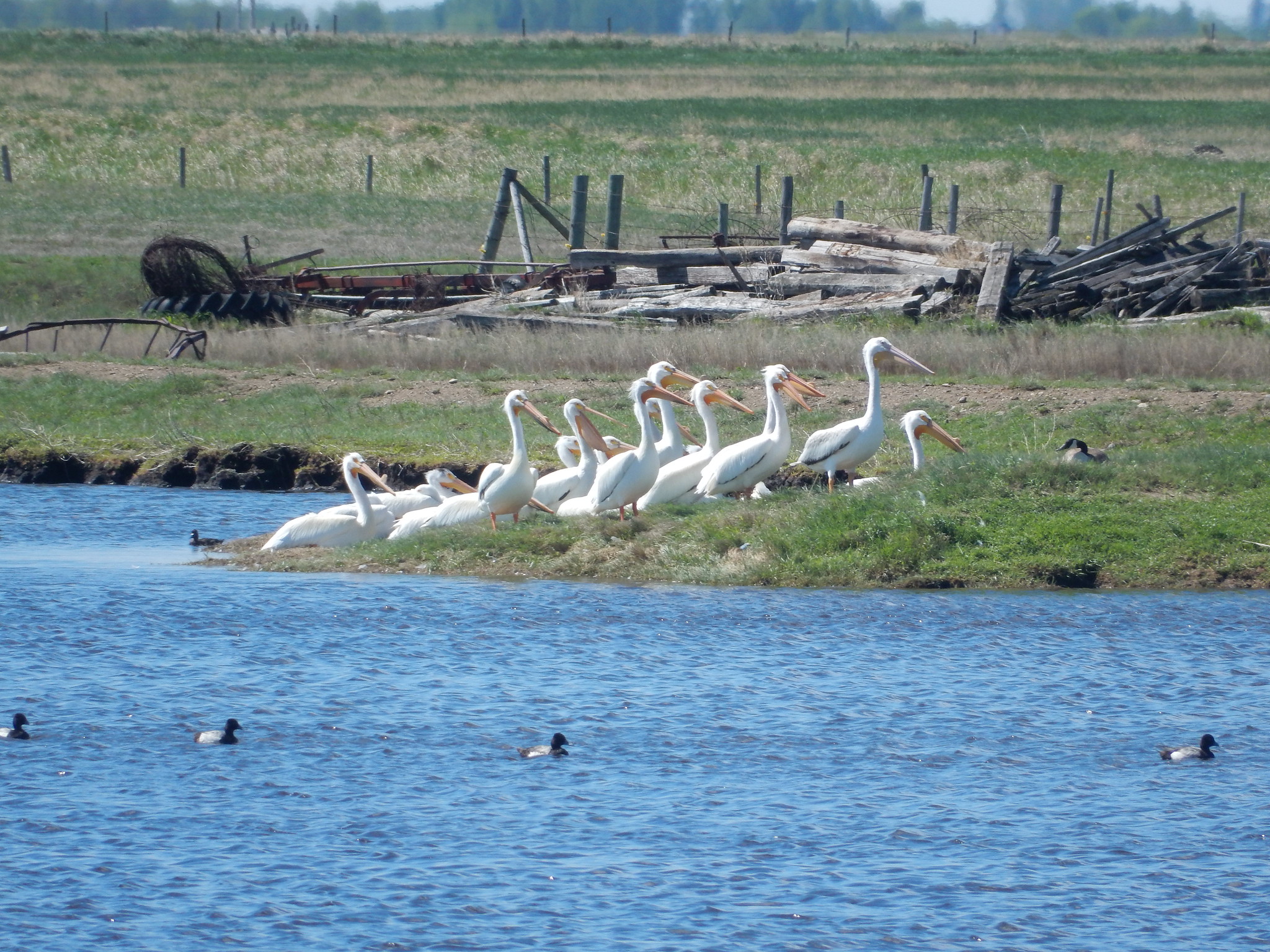 At the campground in Foam Lake, we arrived 10 minutes before my cousin Jane and her husband Jean, who had been driving eastward from near Montreal towing their brand new Airstream trailer.  One might call this an unlikely encounter, but in these days of smartphones, you can organize nearly anything.  We had sociable and delicious evening, and were the first to test their Airstream guest quarters. 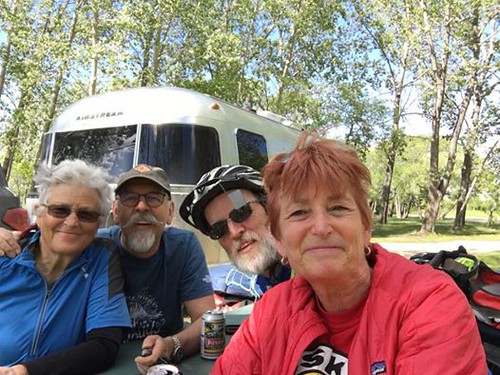 Cousins and their spouses 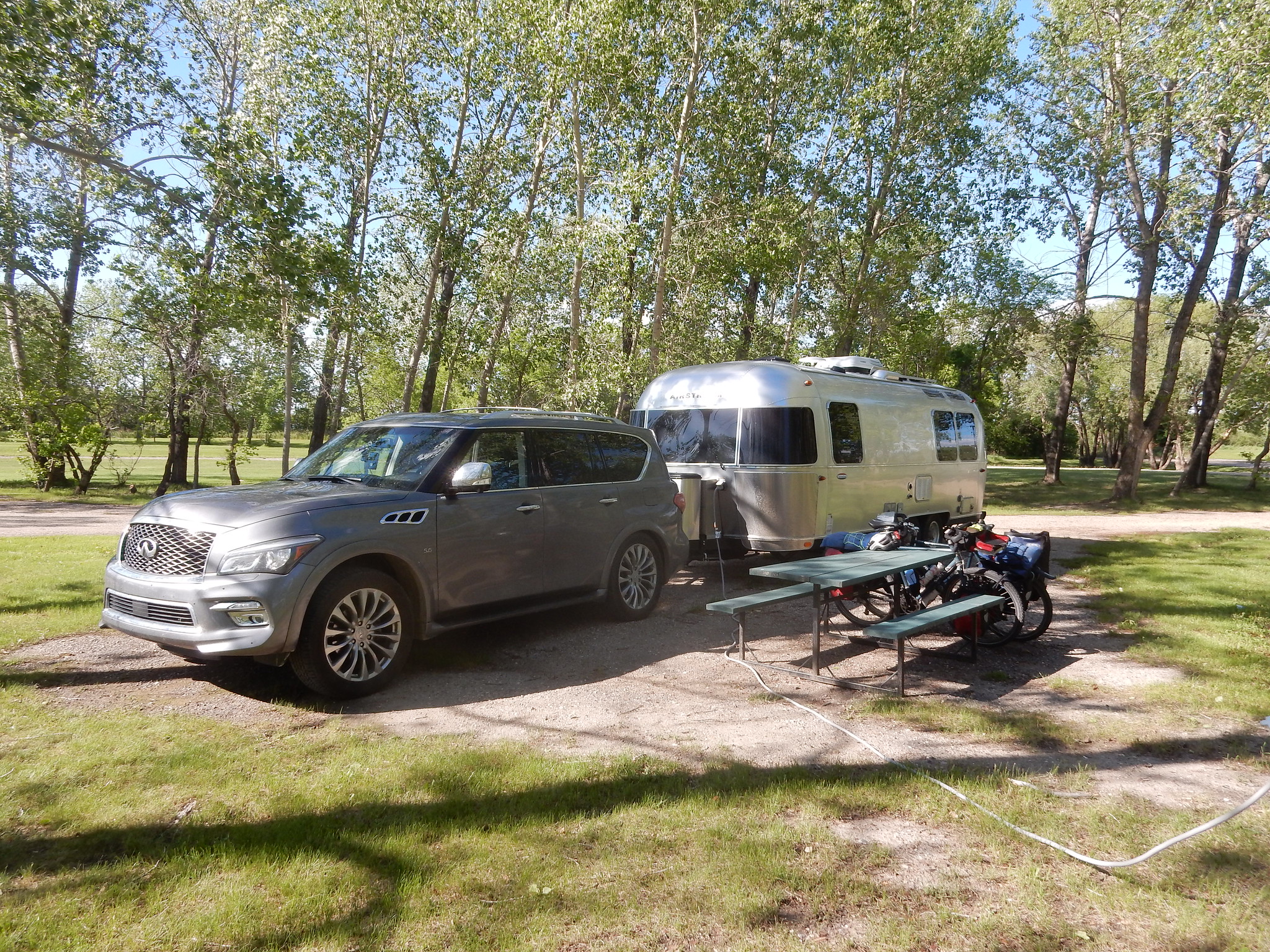 2018/06/04:  Foam Lake 1 km Motel
Having been struck by some sort of illness (later determined to be side effect of statins), and with winds howling from the east, we moved a short distance from the campground to a motel, where we both caught up on sleep and made our way to the much needed laundromat.

2018/06/05:  Langenburg 170 km
Within minutes of setting out, we met our first westbound touring cyclist. We compared notes on weather websites, and invited the  enterprising German lass to stay with us when she reached Vancouver.  The wind had helped her cover over 200 km the day before. It’s a good thing we eastbound travellers had stayed put.

We were going easily at a good clip, and rolled out 170 km before stopping at a motel in Langenburg, where we heated the food intended as a camp meal in the microwave before dropping into bed. 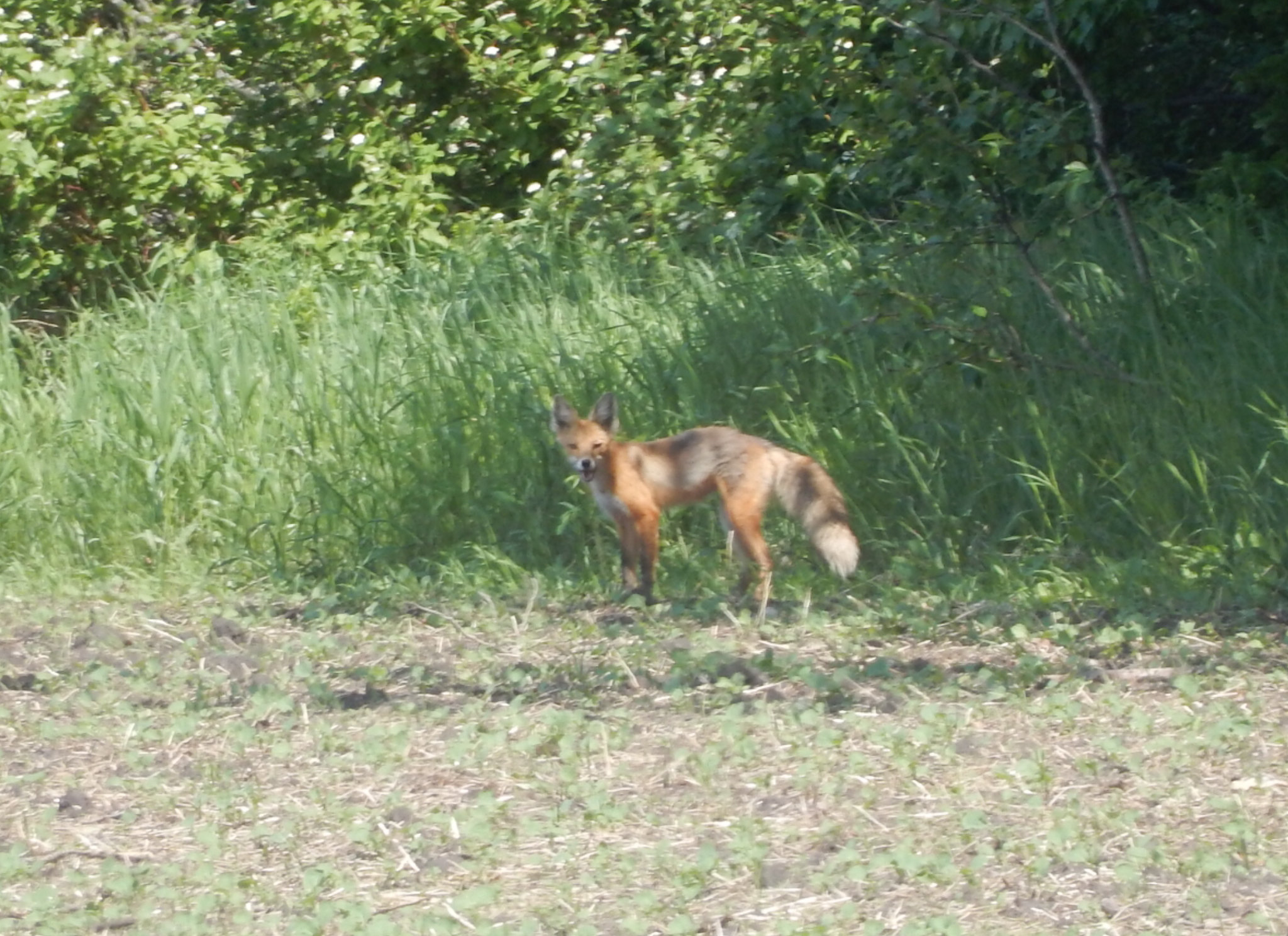 We crossed into Manitoba, and reset our watches for the second time since Jasper before hurtling downward into a coulee and climbing slowly up the other side. We had a second breakfast in Russell, and did a major grocery shop in Rossburn, before turning onto smaller roads toward Nine Finger Ranch. This is part of Hostelling International, but also offers trail rides into Riding Mountain National Park. A group of Grade 5 and 6 students from Thompson, one of the more northerly towns in Manitoba, is visiting here. I was priveleged to sit in on a talk given to them by an archeologist, and was happy to go on a short trail ride with them when there was a spare horse.

The terrain is starting to change, and the land is more forested. We are no longer on the prairies.