From Mountains to Prairies

We had about six otherwise uncommitted weeks, and having previously ridden back to Vancouver from Jasper, thought of riding eastward from Jasper.  Despite various uncertainties, we are off. The idea is to arrive in Sioux Lookout by the end of June for a family visit, and take Via Rail westward home.

This trip is partly inspired by nephew Daniel’s model of riding coast to coast in segments as holidays permit. Some have rolled their eyes at our trip proposal. They are happy to pronounce that “the prairies are boring”, having crossed them at 120 kmh on the Trans Canada Highway. I recall my long ago stint on a seismic survey crew in Saskatchewan, which opened my eyes to the prairies at a slower pace. We’ll see what we find.

After a slow start, we’re beginning to get into the old groove. We’ve ridden 400 km with unfavourable winds and a day of cold rain, and are now in a nice hotel in Edmonton’s historic Strathcona district, to rest the old bones for a few days.

We’ve realized that the pattern of strong westerly winds does not settle till June, so Chris has found several detailed websites that forecast local winds for the next few days with precision. We hope to be able to plan rest days when winds are contrary.

We arrived in Edson  so wet, cold, and spattered in road grit, that a relatively upmarket hotel was most reluctant to have either our bikes or panniers in their pristine rooms. We offered to to clean up as best we could with a whisk broom, but they remained reluctant, so we moved around the corner to what I sometimes call a “no tell motel”. The management at the Totem Motel provided us with a whisk broom and rubber mats for the floor, and there was a huge heater on the wall in front of which we hung clothes to dry. 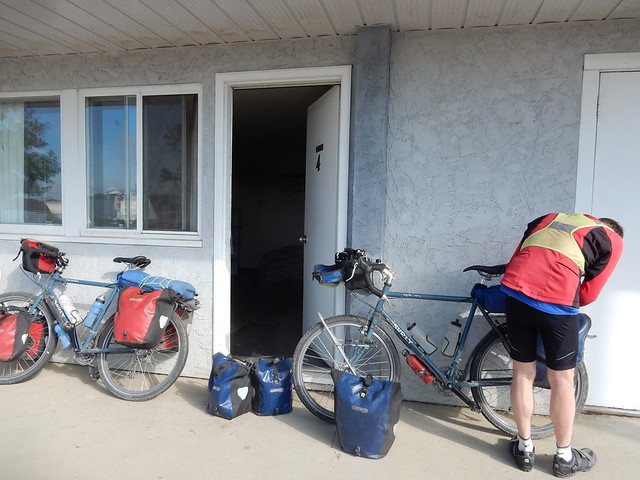 The morning after a cold wet day –  relatively clean and dry.

The next day we stopped in Wildwood. At the Wildwood Hotel, I was greeted boisterously by a crew of hard drinking regulars as I walked through the saloon to register. Our room was up one floor. Lovely Gladys, talkative and welcoming, said that for previous cyclists she’d enlisted large lads from the saloon to help manhandle loaded bikes up the stairs. The lads on hand today, however, had “had a few too many” she warned. We did our own manhandling.

Battling rising wind to the western edge of Edmonton, we flopped into a hotel where we shared the breakfast room with excited kids on their way to the West Edmonton Mall – not quite our kind of destination. I chatted with a friendly Saskatchewan farmer in his crop duster hat, who was very knowledgeable about Louis Riel and the Northwest Rebellion. He was a history buff, and pleased to hear one of our targets in Saskatchewan was Batoche, site of the key battle. 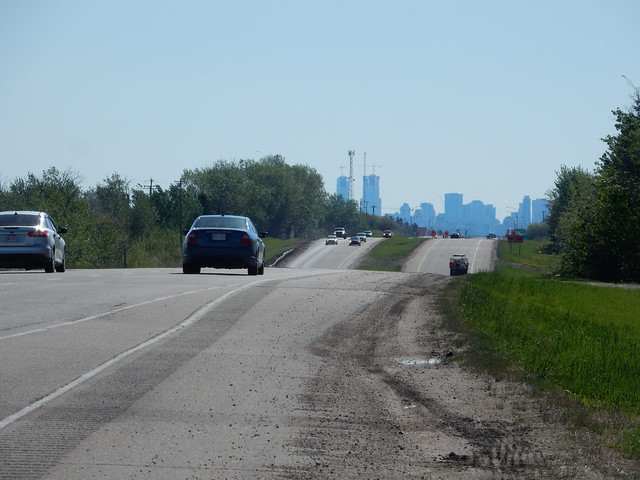 We got onto an aging bike path as we entered Edmonton, and made our way to the scenic ravine park that follows the North Saskatchewan River. As we crossed the river on the pedestrian/cyclist causeway under the new light rail bridge, the historic tram clanked over the High Level Bridge (circa 1900) far above us. 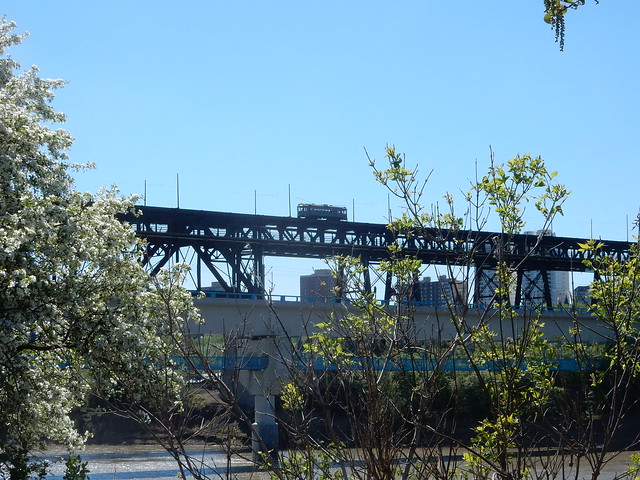 After crossing the river, we continued along the ravine and came across three historic houses, built successively from 1880 by John Walter, an early entrepreneur settler. One of his first projects was to build and operate a ferry to cross the river, which operated till the High Level Bridge was completed. To exit the ravine, we pushed our bikes slowly up precipitous Fort Hill. 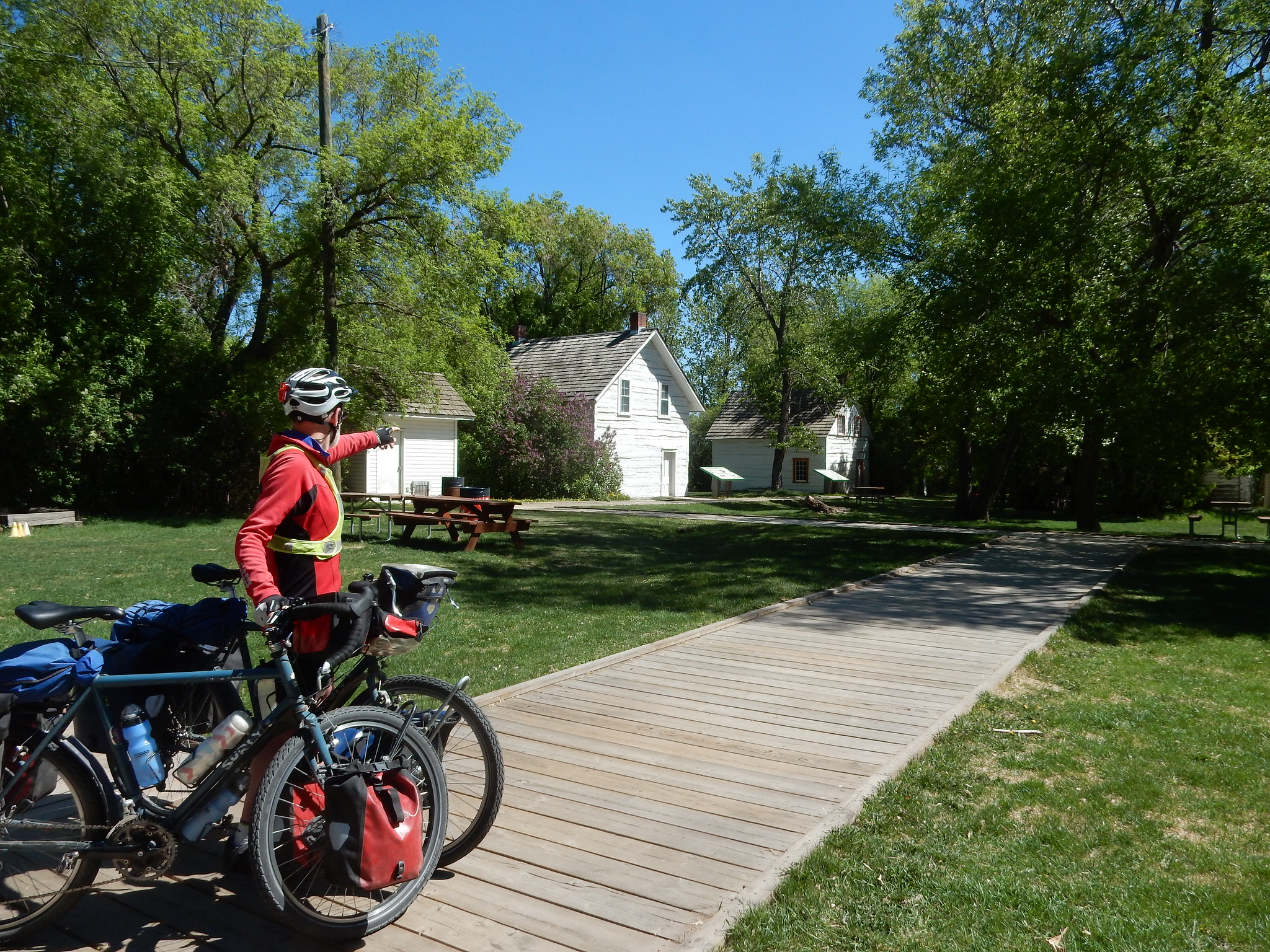 Today we rode the historic tram, and our volunteer conductor told us that before the High Level Bridge was built, you crossed the North Saskatchewan by ferry and took a stage coach up Fort Hill to the top of the ravine. It is so steep that the horses couldn’t climb the hill hauling luggage; passengers had to drag their own belongings up the steep incline and were permitted to load them back into the stage coach only at the top. No wonder the hill had been a challenge for our tired legs! 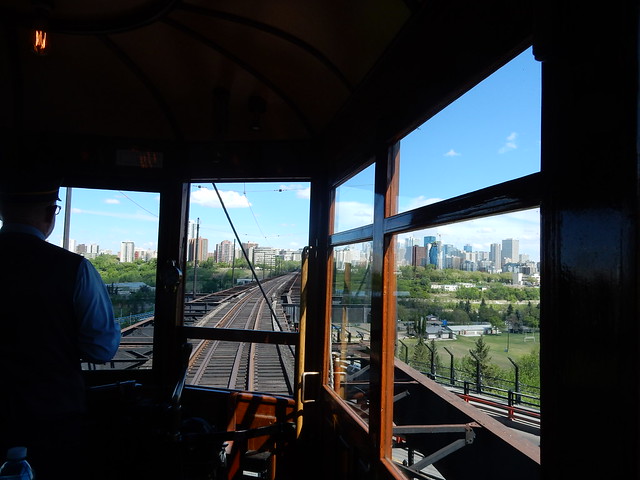 Crossing the bridge on the old tram car.

One response to “From Mountains to Prairies”