2017/04/11-26: 270 km Hike from Alcoutim to Cabo de São Vicente
This was a foray into a new kind of slow travel.  The longest continuous hike Chris and I had previously done was through the Stein Valley, a remote eight day wilderness trek in British Columbia, in 2003.  However, this recent hike across the Algarve was like our bike tours in that it allowed us to get to know a new culture, as we propelled ourselves steadily across a landscape that has been used by humans for millennia.

Route with the official night stops

For over two weeks, we followed Via Algarviana from east to west across the inland Algarve in southern Portugal. This route known in English as the Algarve Way is part of the European network of long-distance hiking paths known as Grandes Rotas in Portuguese or Grande Randonnées in French. Via Algarviana is the GR 13. It follows trails, farm tracks and minor roads for a possible total length of 300 km from the Spanish border to Cabo de São Vicente at the southwestern tip of Europe. 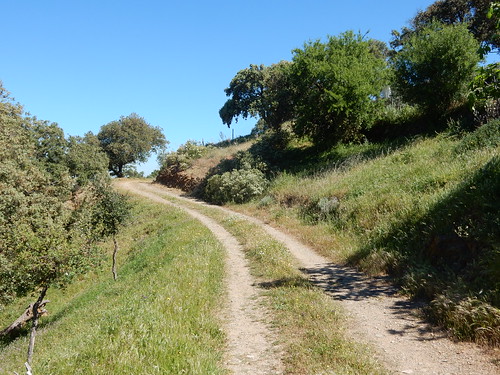 Suzanne and TT arrived in Lisbon a day later than expected, and were still jet-lagged as we travelled from Lisbon by train and by taxi to Alcoutim on the Spanish border to start our hike. We stayed in a youth hostel at the trailhead, sharing the premises with a well behaved Algarve Youth Guitar Orchestra. We set out the next day across a rocky heath. The scent and sight of rosemary, sage, and lavender confirmed that we were in the Mediterranean.  Wildflowers surrounded us, with new species at every turn.  Shrubs of rock rose (Cistus spp ) predominated, to the extent that by the end of our hike we considered this bloom to be the emblem of our expedition.  In the early days of the hike, we passed houses of grey schist, walled kitchen gardens, and abandoned windmills.  This is not the developed coastal Algarve, but a quiet inland landscape which has undergone depopulation in recent decades as all but the elderly migrate to larger towns and cities. 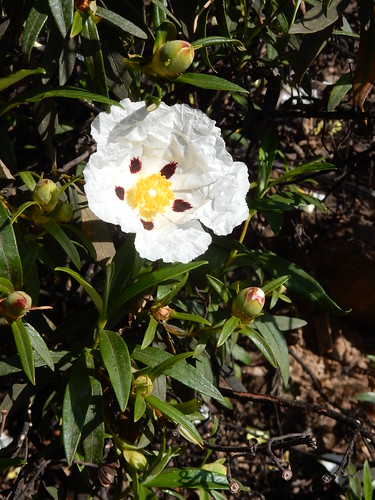 Along the eastern portion of the trail, we passed through villages that were almost abandoned. Sometimes the few remaining elderly residents would greet us.  Many villages no longer have the population to support shops, so restocking our picnic supplies was a challenge.  We quickly realized that minivans which stopped in the village centres and honked their horns were mobile shops, and we learned to move quickly when we saw or heard them. Some sold basic groceries and others were mobile bakeries. We also noticed home care vehicles travelling to serve the basic needs of the elderly residents. Many villages had fountains and benches. We took advantage of these in the heat, appreciating a rest in the shade and chance to fill water bottles or soak our hats. 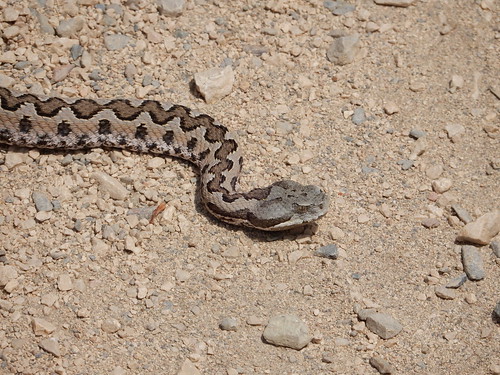 From rocky heath we moved into a landscape of dry fruit orchards. Here old rock walls created shady green lanes between rows of olive, almond, carob and fig trees. West of Messines, we walked on a track that contoured above a reservoir, then crossed the towering dam and followed a dry gorge below it. “Snake!” I cried, as I watched Chris blithely walk very close to a small basking reptile that we later identified as a Lataste’s viper (Vipera latasteii). Its markings were beautiful, but we watched it with respect. They are venomous and  not often seen, so in a sense we were privileged to spot it.

In the Serra de Monchique, we reached the two highest points of the Algarve:  Picota just before entering the town and Fóia (highest peak in Algarve at 902 m) after leaving it. Each of these summits offered unbroken views to the coast. As we passed through Marmalete, we stopped to peer through the window of a community building that had recently closed. The woman in charge kindly opened the doors so we could learn about a traditional local industry: the distilling of aguardente de medrhono, local liqueur made from the fruit of the “strawberry tree” – actually a type of arbutus. We admired the copper still, watched the film, and sampled the end product. By now the kindness of someone staying late to open a building wasn’t surprising. Everyone we met along the hike in Portugal was welcoming.  We understand that trekking  is seen as a new wave of tourism that will be an economic lifeline for the depopulated interior regions.

We stayed in guest rooms and simple hotels, and we camped for two nights near the end of the trek. Some of the “sectors” between accommodations were as long 30 km, so the fact that we were carrying camping gear allowed us to break one of these long segments into two, and in another case to combine a portion of a long day with a shorter one. We took days off walking, once in Messines after seven days of hiking, and again in Monchique after a tough two 30 km days back to back. 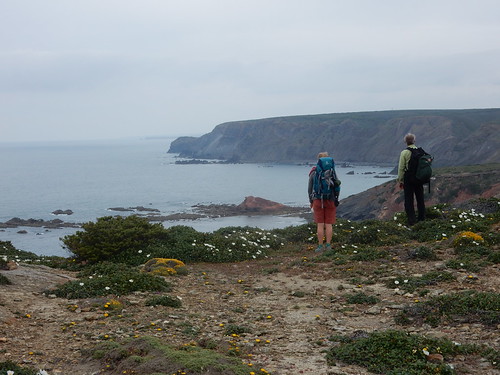 From the mountain area we descended gradually to an open coastal terrain. For our final day from Vila do Bispo to Cabo de São Vicente, we varied our route to follow a combination of the Historical Way and the Fisherman’s Trail along the Atlantic Coast. We could look down from the cliff tops to islands and rock arches below as we approached our lighthouse endpoint. After obligatory photo sessions, we treated our weary selves to four galãos – espressos with hot milk served in tall glasses. 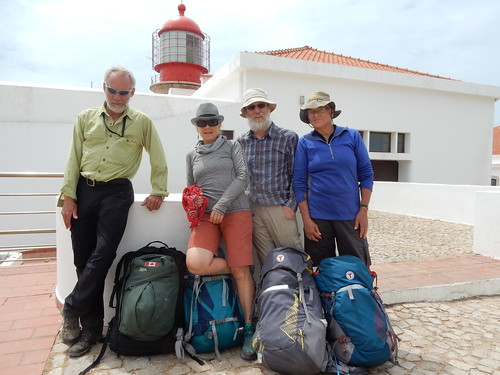 It was different sort of self-propelled adventure, and it was good.