Seeing the Sights in San Jose

2017/02/19-24 and 2017/03/10-15:
Our posts about Costa Rica have focused on hiking and natural history. However, we spent time seeing more urban sights than we usually do – both before and after the car and hiking portion of our travels.

Before the car jaunt, our first foray was to Parque Nacional Simon Bolivar which is both a zoo and a botanical garden. We also saw the Pre-Columbian Gold Museum, and took our time going through Museo Nacional de Costa Rica, located since 1950 in the former military headquarters. The building was available because Costa Rica sensibly disbanded its army in 1948, a redirected financial resources to education and culture. The history of Costa Rica from the 16th to 21st centuries was covered in a permanent exhibition.

Returning from the car jaunt, we went on a tour of the Teatro Nacional given by an enthusiastic young historian, and later to the Museo del Jade y de la Cultura Preclombina . 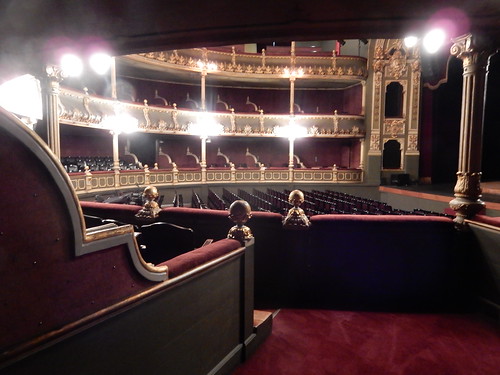 Inside the Teatro, built in the 1890s at the height of Costa Rica’s coffee production wealth. 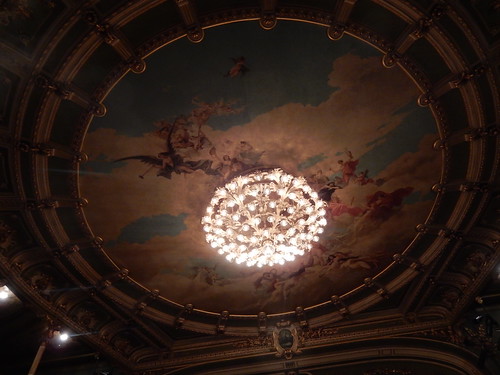 Chandelier in the Teatro; San Jose was the third city in the world, after New York and Paris to have public electrical lighting. The ceiling painting was transported from Europe in four sections of canvas.

The Teatro Nacional is an important national cultural icon, and it only a stone’s throw from our hotel. Not having brought formal attire (Those who know us may laugh!) so as to attend an opera performance, on our final day in Costa Rica we went to a piano recital,  part of the Teatro al Medio Dia series.  Manuel Matarrita, a professor of the School of Musical Arts of the University of Costa Rica, presented “Piano Cinematográfico”- Piano Film –  a collection of melodies used as film soundtracks during the twentieth and early twenty-first centuries. 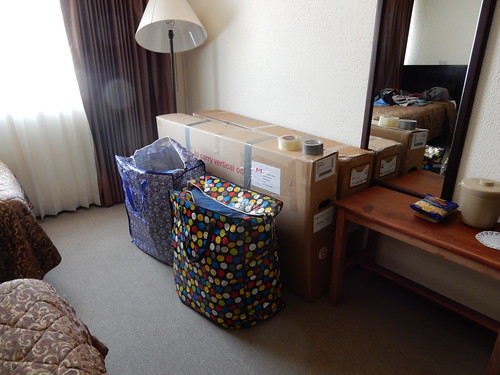 Our final days were also spent re-configuring ourselves for air travel. We located cardboard bike boxes at a bike shop nearby, and  carrier bags at the market.

The homeward flights were uneventful, and we have a few weeks of nesting in Vancouver before leaving for Portugal to hike the Via Algarviana.