The Osa Peninsula is tropical rain forest with huge biodiversity, but we felt we needed to get to higher elevations after months of cycling in tropical heat. We’ve spent the past two weeks in various locations in the Central Cordillera, walking in a variety of higher elevation tropical forests with eyes open and camera in hand. The colours and the variety of plants and animals is astounding.

We spent a few days at Talamanca Reserve which abuts Chirripo National Park about 100 km south of San Jose. Apart from the walks and the waterfalls, we had a quiet cabin and the food was excellent. Our stay at this place stands out as the most relaxing and enjoyable of this car trip. We’ve put together an album of photos from our stay.

We learned that you can climb Cerro Chirripo from here, but that it would require more substantial packs and boots than we are carrying in cycling mode.  We’d also need an advance booking at a high cabin, since the summit cannot be reached in a day by most mortals.  At 3820 m, Chirripo is the highest peak in Costa Rica. I think an alpine area in the tropics would be fascinating to see. 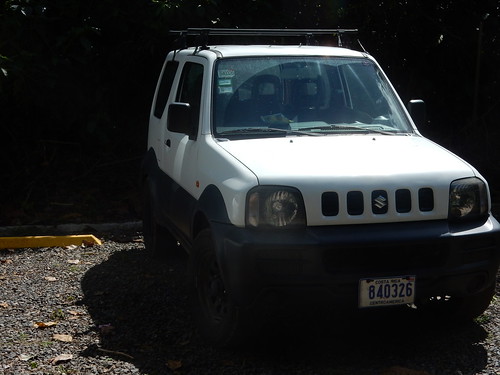 The car we’d rented was far smaller than we’d imagined from the photo. Our pannier bags barely fit into it, and there was no way of safely transporting the bikes. We’d hastily placed them into ad hoc storage at our friendly base camp hotel, but I’d been fretting about them sitting on the roof near a third floor service area. Since our route northward meant going through San Jose, we made a quick stop at to make certain they were OK, and to confirm when we’d return the car and pack up bikes for our flight homeward. Luis of the Orthodontics (to differentiate from Luis with Glasses) reassured me cheerfully with  “Es su garaje” – it’s your garage – in reference to ongoing bike storage. 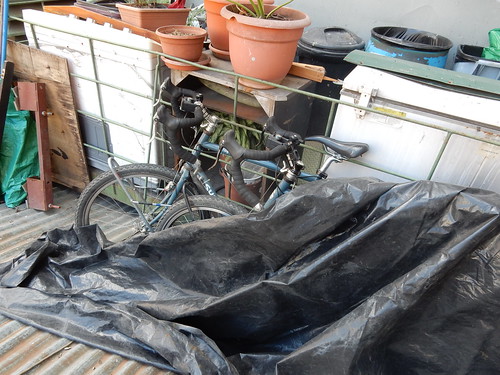 We continued to a cabin near Poas Volcano. We’d visited the area thirteen years ago, after hiking in the Osa with our offspring.  We toured the coffee plantation that Chris had seen before but which I had not, and we spent a day strolling to the volcano viewpoint. Then we braved the winding mountain roads (thanking ourselves we weren’t cycling) to la Fortuna, near Arenal National Park. From La Fortuna we did several jaunts.  Natural history highlights included sighting a mother and baby sloth in a tree, as well as watching a hummingbird tend her tiny nest. We finally did something that was more like a hike than the gentle walks: we scrambled up a badly eroded and very muddy trail to Cerro Chato, and descended steeply – clinging to roots –  to the crater lake for a swim. Dormant rock-climbing skills came into play. We kept pace with two twenty-something lasses, American and German, which seemed to surprise them at first. At the lakeside and on the descent, we chatted with them and with an Israeli lass who appeared. (I was the only one who actually swam!) We drove them back to La Fortuna, and set about washing our very muddy selves and clothing. 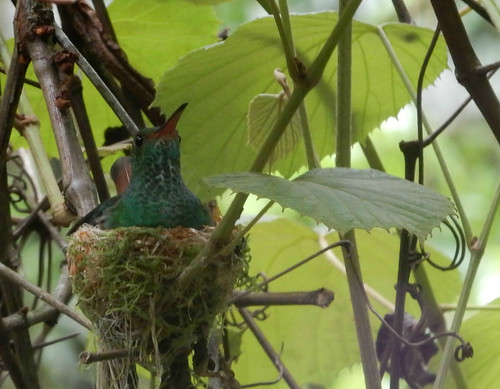 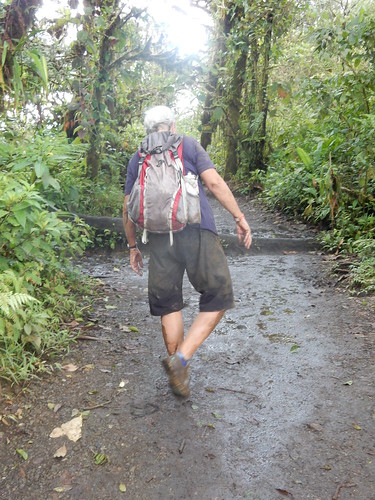 At about 10:30 p.m., some young lads returned to the room next to ours; they turned the television on full blast, shouted,  laughed, and horsed around. I detected Quebec French as we waited in vain for them to settle down. When the rowdiness  had only increased at 11:00 p.m., I got dressed and knocked on their door. I faced some surprised looking sixteen year olds who I later ascertained to be grade 11 students from Collège de Montréal . I reminded them firmly yet civilly  that we were only a wall away, and asked if they would try not to disturb us. I mentioned that we’d set our alarm for 5:30 a.m., and would try not to disturb them when we got up. They looked shocked to hear reasonably fluent Anglo-Quebec French in Costa Rica, and to their credit there was an immediate settling down. If I’d seen their teachers at breakfast I would have commended their students’ behaviour.

We used the lowest four-wheel-drive option to approach Volcan Barva on a rough road the next day, and walked to the peak identifying tapir tracks along the way. This version of cloud forest was unique in that it contained oaks. We’ve created an album of our four volcanoes tour.

We found aesthetic mountain lodging for the last night of our car circuit, but were disgusted when we realized the Italian owner, about our age, happily served up an extreme right wing diatribe with our afternoon coffee. He went as far as to criticize Canada’s policy of accepting refugees, and expressed his profound Islamaphobia crudely and cruelly. (He himself had tried unsuccessfully to immigrate to Canada.) Chris and I sat in silent horror, and quickly bolted to our cabin. Though I proposed finding somewhere else for dinner, Chris insisted we return to the dining room “because we said we would.” As we walked in, Signor Mussolini started again with a distortion of the latest news from Europe. I turned to leave, and Chris followed. We found a pasta place just down the road, and decided to give the next morning’s included breakfast a miss. (The world will soon hear about Signor Mussolini on Trip Advisor)

We stopped for breakfast at a local soda – fast food place – on the way back to San Jose. The young lad who served us our gallo pinto and scrambled eggs was patient with my Spanish, and we chatted pleasantly about sloths and tapirs as we paid the bill. Then we set out to brave the San Jose morning traffic.

This entry was posted in Bike Touring. Bookmark the permalink.

One response to “Cloud Forest”