Ometepe and south to Costa Rica

2017/02/16: Ometepe 90 km
It was time to get on with southward travel, so we left the hostel and Gerry, the amiable Irish host-owner, at 6:a.m., inadvertently leaving behind our granola, oranges, cheese, and my sun hat. We ate watermelon at the roadside and proceeded to the ferry from San Jorge to Moyogalpa on the island of Ometepe, which lies in lake Nicaragua and is dramatically formed by the two volcanoes: Concepcion and Madera. On the hour-long ferry crossing, we chatted with John, a fellow traveller with local contacts. On his advice, we rode about 15 km on the island to stay at a hotel at Charco Verde. 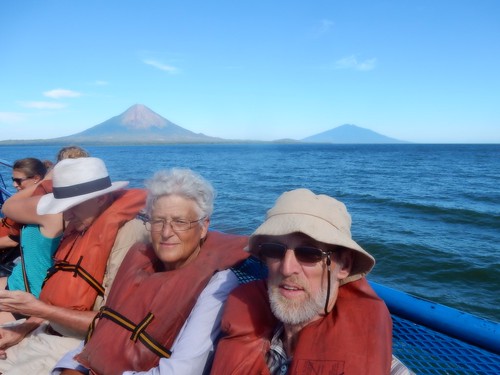 Us on the crossing with the two volcanoes of Ometepe behind

2017/02/17: Butterflies and Walks
Part of the appeal of Charco Verde (“green pond”) was a butterfly enclosure as well as a network of hiking trails through dry tropical forest. We dressed for cycling, planning to hit the road for a day trip after a quick visit to the butterflies. The displays of larvae and chrysalis and the fluttering mariposas in an enclosure kept us peacefully fascinated for far longer than we expected. The bike jaunt could wait a day. We strolled on trails instead, and decided an afternoon siesta was in order after the fairly long and very hot day. 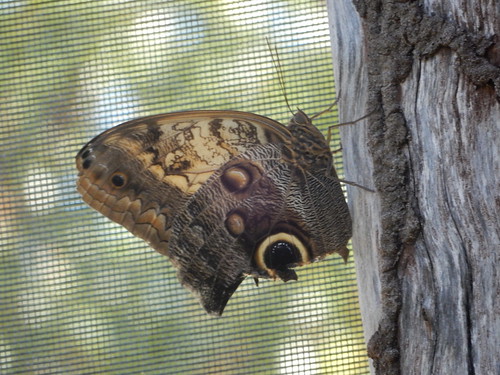 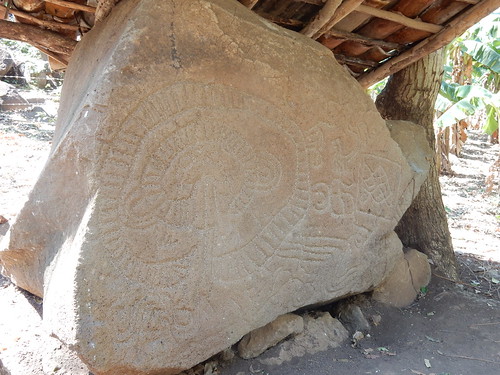 Taking along little more than bathing suits and camera, we rode first to petroglyphs and then Ojo del Agua where a depression enhanced by stonework is filled by a natural spring. The water is clear and cool making a really fine swimming hole, and the rope swing was great fun! After our swim, we went to the on-site café where we ate the worst hamburgers we’ve ever eaten. Great location; awful food.

Trundling back past our hotel, we turned down a sandy track to the small museum recommended by our waiter. There a local lad gave us a structured tour of the 1,500 pieces of locally found Prehispanic pottery, describing the technical and artistic advances which define each era in mercilessly rapid-fire Spanish. I congratulated myself on translating about 80% of his spiel for Chris without having to ask the earnest lad for clarification. Phew! 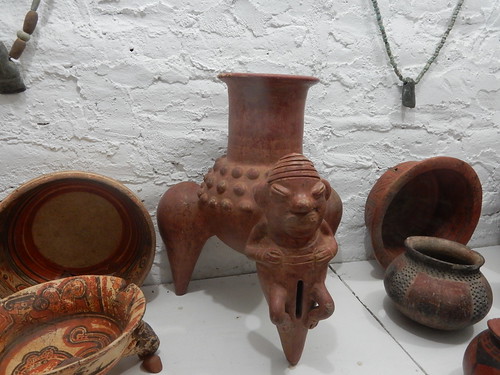 Pottery items found recently in a nearby volcanic mudslide. Road signs would warn of areas where these often occur. 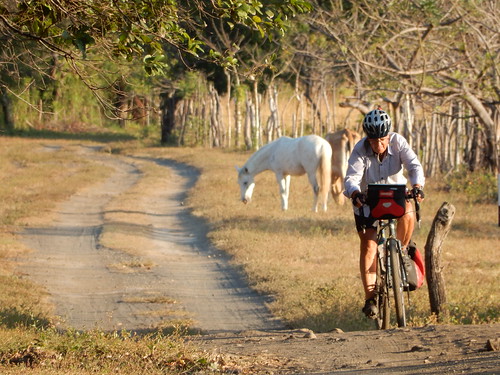 We bought mandarins and passion fruit on the way “home”, chatting to two women (a Brit and a Kiwi at my guess) on rented bikes.

Till recently, there was a ferry from Granada to Ometepe and on to San Carlos at the SE corner of the lake. Taking this might have put us onto a relatively quiet route in Costa Rica, but it’s no longer running. Instead, we got ourselves to the smaller port of San Jose del Sur well in time for a 7:30 a.m. ferry back to San Jorge, and pedalled southward on the Panamericana, a relatively quiet road in Nicaragua.

It was lunchtime as we neared the border. We had cordobas to spend, so we pulled into the last Nicaraguan comedor. I had already sat down while Chris was still looking around warily. We ordered chicken and rice, and ate most of our meal while two very drunk men sat precariously on a wall a few feet away. They swigged clear liquid from a bottle, wrapped their arms around each other to support their swaying selves, and gestured and grimaced at us as they clutched the back of Chris’s chair. He moved to the opposite side of the table.

We prepared to pay and leave, having left some rice and beans and chicken bones on the plates. A desperate-looking local man swept in as if to clear our plates, but sat down instead to gnaw the bones again and eat the leftover rice with our cutlery. We indicated to the concerned waitress that we didn’t mind him eating our leftovers, and she gave him a tortilla as she took the the basket away. As we were leaving, one of the two drunks fell backwards off the wall into an inebriated heap, knocking over several chairs. Things can be tense and strange near borders.

We changed our last 500 cordobas into colones, and pressed on through the various steps of the Nicaraguan exit procedure: two small payments at different locations, another place for an exit stamp that we missed on the first run through, a check point from which we were sent back for having missed the stamp, and then finally a successful pass through the checkpoint.

The Costa Rican side would have been a breeze if we hadn’t been crossing at the same time as a busload of tourists, mainly Ticos returning from Nicaragua. We leaned our bikes in a corner as we approached the immigration counter for our entry stamp. On our entry forms, there was a space for “ticket number”. I understood they wanted to know our means of transport, so here we had both entered “bicicleta”, having come almost 3,000 km from Cancun by that method. The immigration officer queried this, and I pointed to our bikes behind the pile of wheeled suitcases. He raised his eyebrows, and stamped our passports. We were waved past scanners by customs, and emerged into searing heat, loud hawkers of cold drinks, buses and booths selling bus tickets.

Hot and tired, and hard pressed to make the Osa Peninsula (SW Costa Rica) by a date when a naturalist-friend has offered to guide us in the rainforest, we investigated bus options to San Jose. The larger bus was full and departing, so we loaded our bikes and panniers carefully into the underbelly of what one might call an upmarket chicken bus for the six hour run to the capital. As we disembarked and reassembled in a central bus terminal well after nightfall, the cheerful driver asked us to pose for a photo. We stumbled as directed to the nearest hotel, and collapsed into a windowless basement room. We ate a pack of salty banana chips for supper and fell asleep.