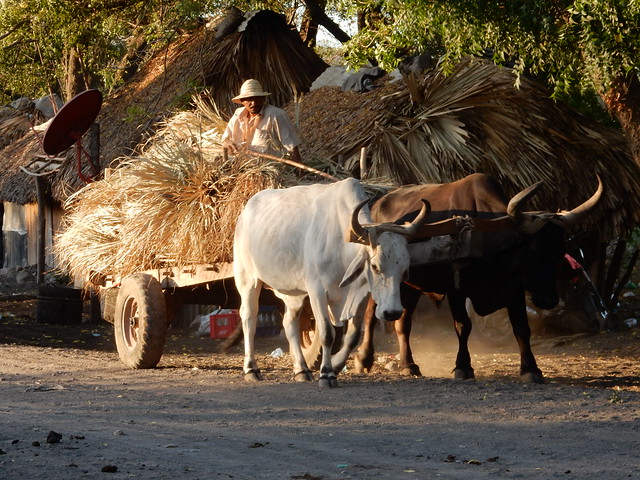 I was surprised to find out that the satellite dish is connected to a large flat screen monitor, inside a straw hut with no sides.

The first 14 km from Potosi was on dirt road through farmland. There were plenty of animals to dodge, mainly cattle being moved to their day’s grazing locations. The hotel we found in Chinandega was basic with “no hot water”, but what came out of the tap was more than warm enough for us in this weather. 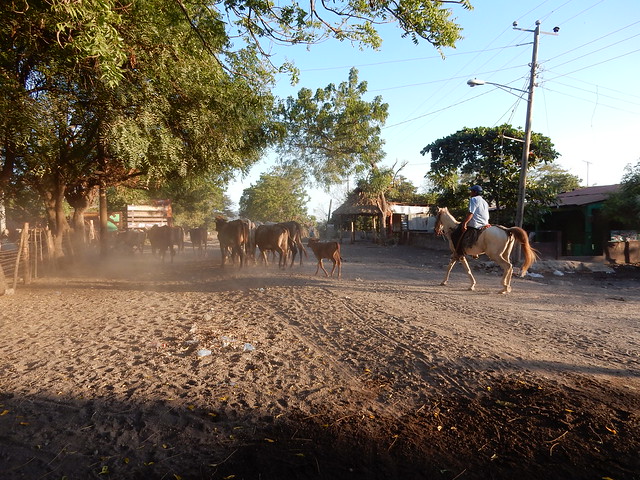 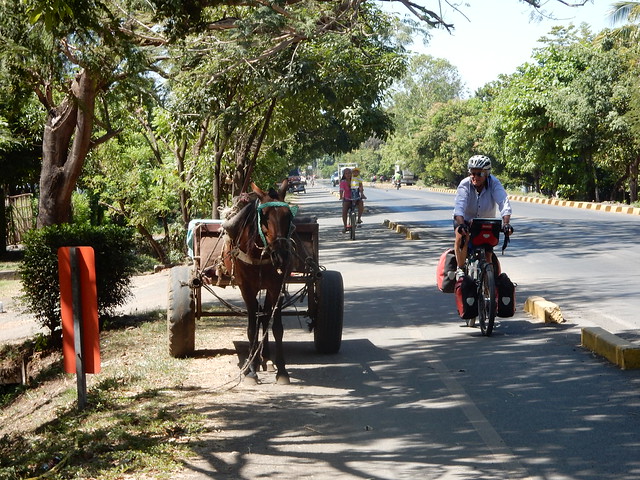 Horses use the bike paths

The day to Leon was even hotter, but we arrived before noon at the relatively fancy hotel Chris had booked. We found a café half a block away where we became more or less regulars.

2017/02/08-09: In Leon
Chris’s front derailleur had bitten the dust on our last day in El Salvador; it was ten years old and the spring had broken. We’d inquired about bike repairs upon arrival in Leon, and set out on our first day in town to the location we’d been directed to. It was an area of stalls geared to keeping local utility bikes moving. A friendly fellow installed a new front derailleur on Chris’s bike (definitely NOT Shimano) for a very affordable 150 cordobas. He even donated a rag to the cause of our next chain cleaning session. 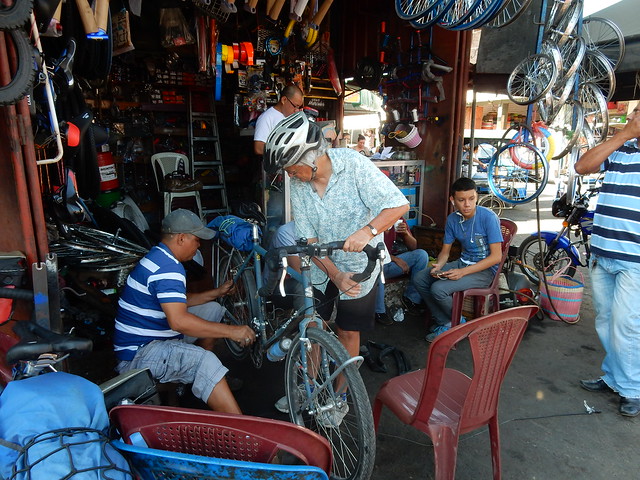 Fitted while you wait and act as a bike stand

Returning the bikes to a storage room at the hotel, we set out to the Revolution Museum. Along with a couple from Montreal, we were given a considered account of recent Nicaraguan history as we toured black and white photos and memorabilia inside a former college building. At the end of the tour we were taken to the roof of the building so as to put key revolutionary events that happened here into perspective. We walked carefully on rusting corrugated metal panels, and avoided leaning on crumbling concrete railings as we admired the view. 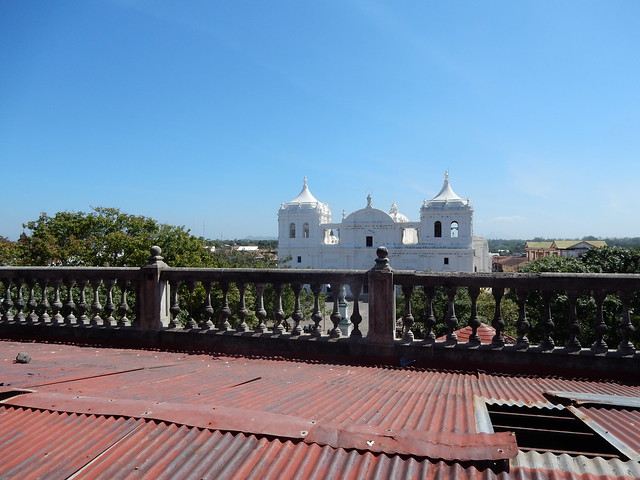 View from the roof of the Our Lady of Grace Cathedral, León

On our second day in Leon, we spent the morning at the art gallery Centro de Arte Fundación Ortiz-Gurdian viewing works of a wide range of Latin American artists. This is likely the most comprehensive collection of modern Latin American art in the world, set in two grand colonial buildings.

2017/02/10: Managua 57 km
We knew the ride to Managua was over 90 km, so we got up well before dawn. I managed to step on the night watchman who was sleeping on the floor in the dark storage room where our bikes were parked. Poor fellow!

It was a hot and windy ride. The rolling terrain that we rode across was scrubby grazing land with few tall trees to slow the headwinds and side gusts that buffeted us. We were each pushed off the pavement into the shoulder several times. After consideration of the likelihood of being pushed the other way into trucks, we decided to wait at a bus stop and get a ride to Managua on the next chicken bus.

We helped heave our fully loaded bikes in the back door, and sat near them. Even as the bus became more crowded, no one complained about our bikes blocking the aisle and making some seats hard to reach while passengers stood. As a woman got out of her seat to disembark, something inside her shoulder bag poked its beak out and squawked loudly, proving we were indeed on a chicken bus. The conductor collected the grand sum of 120 cordobas from us as we disembarked at a hectic terminal, and we braved incredible traffic for a short way and collapsed into a hotel.

2017/02/11: Granada 52 km
We ate the hotel’s included breakfast at 6:30 a.m., and set out relatively late. The ride out of Managua was a series of sharp ascents on a six lane highway with traffic of all sizes and speeds including horse-drawn carts. We stopped at a café when we felt we were almost half way, and scarfed tres leches cake with our coffee. As we were leaving, we greeted, a group of road cyclists decked in Lycra and logos who had just pulled in. Chris suggested I ask them about the road ahead. There are times when simply being self- propelled on two wheels creates instant kinship, but this wasn’t one of those times. They were all male twenty somethings. I think our greyness and my gender offended their fragile machismo.

We’ve reached Granada and settled ourselves into the Casa del Agua hostel where Chris had made reservations. One of us has already dutifully cleaned and lubed her bike chain. And we’ve arranged to visit the school for migrants on Monday. 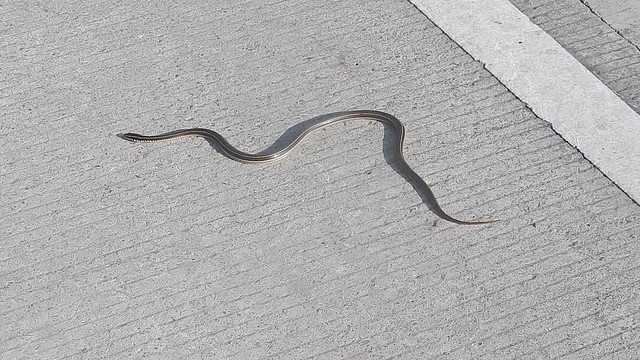 Excitement of the day: click on image for movie

Speaking of our greyness, there are two memorable roadside comments we received in El Salvador:

The day we entered the country, someone called out ”¡Abuelita sportiva!” at me. Well, I can take “Sporty granny” a whole lot better than “Gringo”. And on our final day, a child shouted out “¡Papa Noel!” at Chris. His beard has grown long and is mainly white.