Crossing from El Salvador to Nicaragua 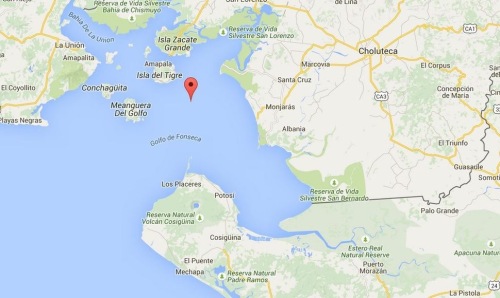 When we first agreed on making the crossing, the boat operator had urged us to hurry to the immigration office so we could set out before the winds picked up. Off we went to find it closed. We sat on the steps for almost three hours, and periodically the would-be boat operator or one of his mates would get news of what the officer might be doing, or when he might arrive to open the office. He finally appeared. Our passports and the boat operator’s license to transport us were photocopied to create a document allowing us to proceed, and our passports were stamped. 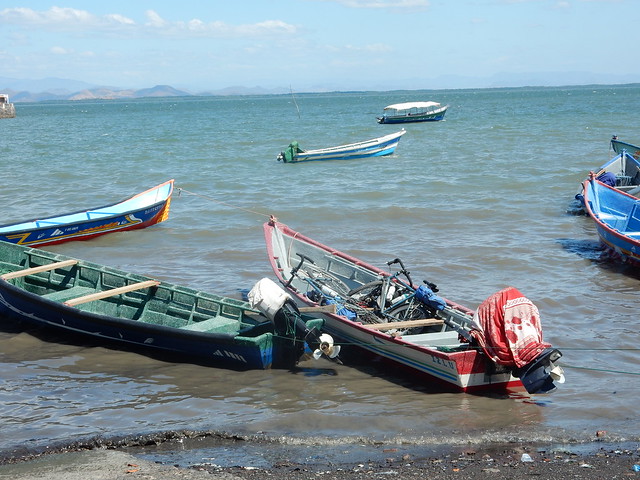 In a rising wind, our bags and bikes were loaded into the skiff, covered with a plastic tarp, and secured with ropes. Gasoline was purchased and loaded aboard. We set off, and our knuckles were soon white from gripping the gunwhales as we crashed downward after cresting each wave. The anchor was placed on top of our gear to hold the flapping tarp, and there was a metallic thunking sound as we descended from each crest. Chris remarked that at least we’d never worry again when entrusting boxed bikes to baggage handlers.

The driver pointed out Meanguera del Golfo as we passed the disputed island now deemed to belong to El Salvador. As we approached a spit of Nicaraguan land, he paused …either as if he was unaware of the port’s location, or as if he was testing us. Chris pulled out his cell phone with gps capability, and directed him onward. Then a boatload of Nicaraguan border personnel pulled alongside, to inspect our documents and cargo. After over two hours of battering travel, we finally landed on a black sand beach.

The volcanic sand was hot as blazes. Our feet were bare to get out of the boat and move bikes and bags up the beach. Chris put shoes on with sandy feet, but I didn’t – and I have never done such a fast high step to get to the immigration office. I was yelping to get them to open the gate because it felt like walking on hot coals. When I got to the women’s toilet, the fastest way to cool my feet was to dip them into the toilet bowl, so I did.

After filling in forms and paying a $12 entrance fee at immigration, we mounted bags onto the bikes. Our gear was inspected by a customs officer, first at the office and later at a gate, as we pushed our bikes up the concrete slab. To our surprised relief, we’d arrived unscathed, and we moved on to something like a motel, a simple place run by a cheerful pair of animal lovers who welcomed us. Chris carelessly parked his bike under the perching parrots, and realized his mistake when they saw what they did to his bike.

This boat crossing meant we missed two or three days in somewhat sketchy Honduras, and would also put us on a nice quiet road for a day. Chris’s first Nicaraguan beer arrived in an insulated sleeve to keep it from warming too quickly. Yes, it was hot. Possibly hotter than El Salvador.

5 responses to “Crossing from El Salvador to Nicaragua”