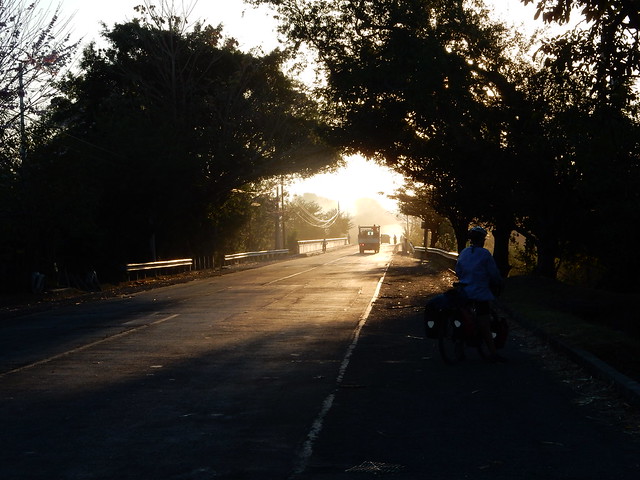 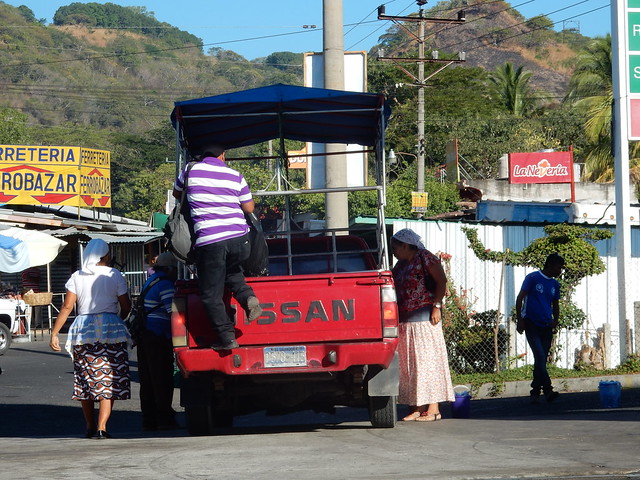 Women are often wearing frilly aprons and white kerchiefs. We wonder if their kerchiefs have any ethnic or religious significance.

We had a pleasant juice stop at a farmers’ market, with a good chat with the man selling shrimps. 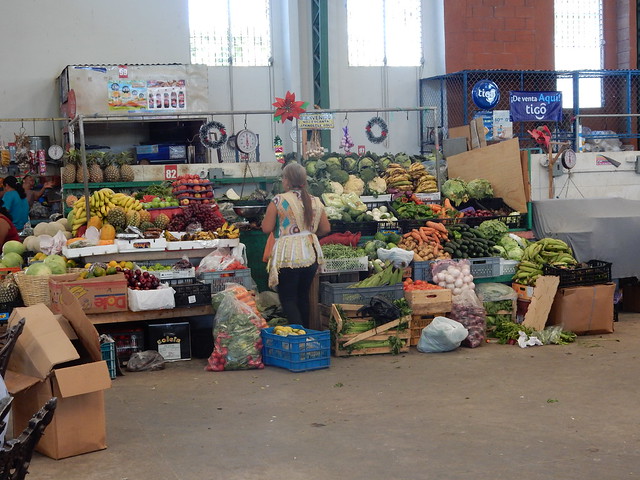 The only hotel option in Zacatecoluca was La Zona Auto Hotel, a unique experience for us in all our travels. We entered a private and well guarded courtyard, off which there were curtained parking stalls with a room beside each. The rooms have lots of mirrors, including on the ceiling, and some rather odd looking furniture. These are “love hotels”, normally rented for three hours at a time. We made a deal for the afternoon and night, having ridden since 6 a.m.. It was cleaner had better sheets and towels than anything seen since Antigua, with wifi and air conditioning. I’m sure we’re not the first cyclists to stay in such a place.

2017/02/03: Usualatan 60 km
The ride was flat and uneventful. We leapt at the rare chance to have a bath in our hotel, and soon got a phone call to say the bath had leaked to the floor below. We switched rooms. 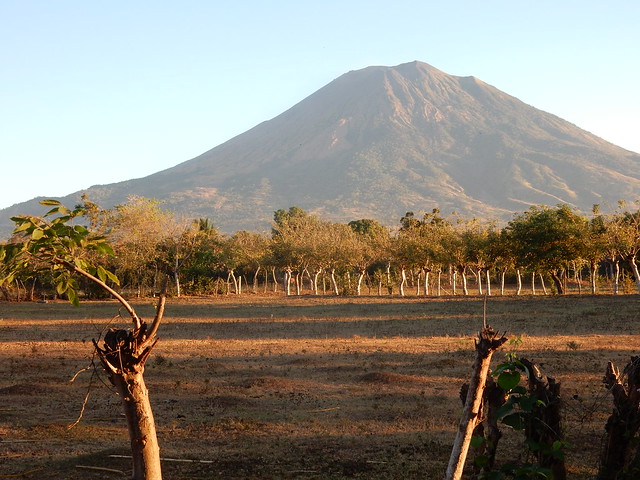 Constant reminders that we are following the Ring of Fire.

2017/02/04: El Carao 48 km
A highlight was meeting two cyclists coming the other way, and stopping for a good natter and cold drinks. Luci had ridden from her home Brazil and Gunver, from Germany, had started in Ushuaia. Each of these young women had been travelling solo till they met and teamed up a few weeks ago. They had been expecting to meet us, after spending the previous night with Jose, the stellar Warmshowers host we were on our way to meet. 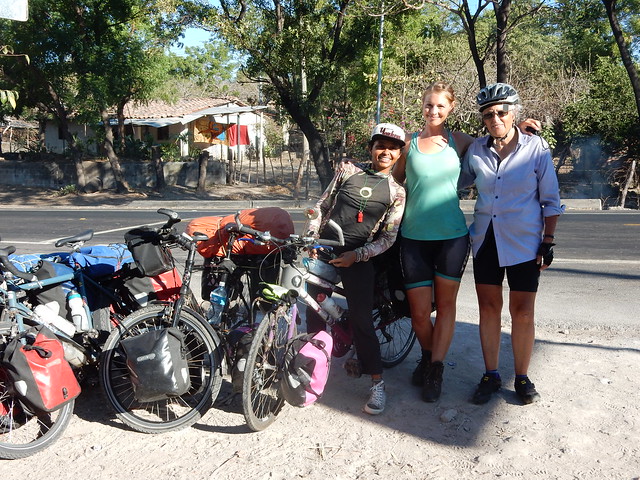 Luci and Gunver with Margo.

Jose is a delightful man, the father of two young children here in El Salvador, and an older daughter in Montreal, where he lived from when he was 13 till 2003. That year he cycled from Montreal to El Salvador in response to a bet made in a bar in Montreal! He and I quickly decided it was best to communicate in French. He gave us key information for getting across the Gulf of Fonseca by boat, which would get us directly to Nicaragua without crossing Honduras, and keep us on smaller roads.

Jose was busy moving construction materials, but lent us a car to drive to the nearby beach down a rough road dodging some large pigs. At the beach café a family arrived and a woman in American looking attire began to tap her feet happily and sing aloud to the music. We felt we’d learned to pick out jubilant returning expats, of which she was one of many. We slept in a completed but unfurnished room of the motel Jose is building to a high standard.

2017/02/05: La Union 43 km
We set out at dawn, because we understood there was the chance of a collective boat leaving to cross the gulf at around 9 a.m.. Jose had told us the likely price for crossing with bikes in such a boat. However, on arriving by 9 at the port, we were informed there was no boat expected to leave till Wednesday – and that departure was far from certain. An enterprising boatman quoted a price for a custom crossing. We considered his US$200 to be fair for a journey of two hours each way, and agreed. We were tired from our early ride, and guzzled Coke as we extracted the last US$ from the seat-post of Chris’s bicycle. The driver wanted to leave promptly before the wind rose, and whisked us to the immigration office for an exit stamp. The office was closed.