2017/01/21: Saved in San Marcos
We stood shivering, as we pondered how to break in to the treehouse. It looked impossible. Then the door of the cabin just below us opened, and an English lass popped out for her own nocturnal jaunt to the loo. She too was unclothed, but quickly nipped back inside her abode upon seeing us. She came out again – decently covered – coming to our rescue with blankets, and we quickly wrapped ourselves in these. Tiptoeing past a growling dog to the owner’s cabin, we were happy to find he was an extremely early riser, and that we were not the first to lock ourselves out of the treehouse or one of the cabins.

We settled back into bed, and rose a few hours later to eat breakfast prepared by Gerardo, the owner. He calmed Chris’s fears by assuring him there was a bank machine in town, and that we could take a boat across the lake to Panajachel for an easier exit from the lake basin. Tired from four tough riding days, and having had a poor night’s sleep, we spent part of the day dozing. We also drank coffee in San Marcos and went to the dock to speak to people involved with the lake boats about making the crossing with bicycles.

That evening we had supper prepared by Gerardo, formerly of Guatemala City, who also joined us for tea and an evening of good conversation, with his insights into how things work in Guatemala.

2017/01/22-23: To Antigua via Tecpan 55, 54 km.
We rose early, filled water bottles with spring water, and wheeled loaded bikes to the dock in town. The boat captain proposed a very fair 100 quetzals to take us with bikes and panniers to Pana, and our bikes were carefully secured to the roof of his craft. We departed just after 7:00, with most of the other passengers being local, many in indigenous dress and carrying baskets of goods. 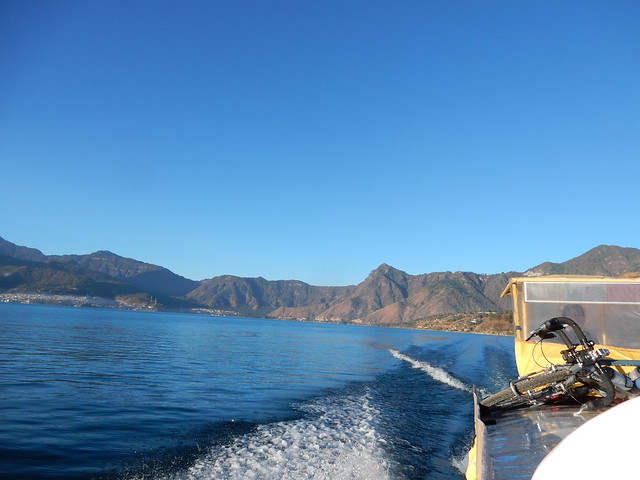 Leaving San Marcos by boat, the only sane way with a fully loaded touring bike.

Landing at Pana, which has an expat community, we overheard a man talking on his cell in English about the women’s march. It was a jolt to remember there was a world outside this misty lake basin. We took Gerardo’s advice and got a small pickup to drive us 7 km to Solola, avoiding the steepest part of the climb. Further on, a young woman stopped her car to speak to us. She was a Warmshowers host in Xela, and although we’d bypassed Xela, she was happy to give us pointers on the route ahead. 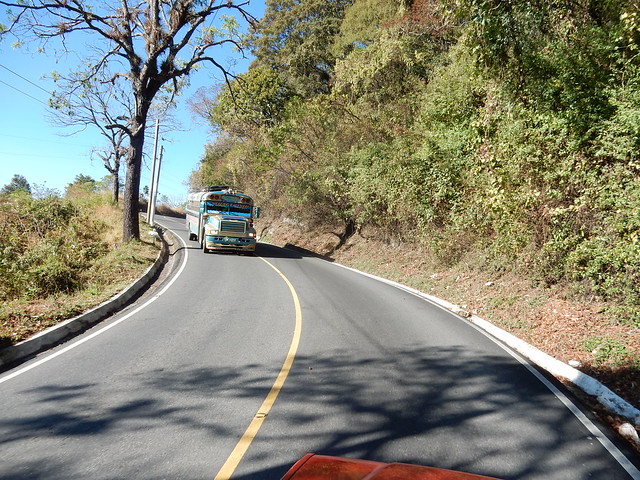 Gerardo had advised us that this road was too steep and narrow to be safe on a touring bike. This picture taken standing in the back of a Toyota Pickup hurtling up the road, proves him right. Thank you Gerardo.

Arriving in Antigua, the former capital of Guatemala, we realized we were nearing the historic centre when we found ourselves riding on cobblestones. It was only midday, and we had plenty of time to find accommodation. We stopped for iced coffee and to use wifi to check for response from an “adventurers’ hostel” we’d contacted that professed to welcome cyclists. There was none.

As we sat sipping coffee, Agatha – also a cyclist – stopped to chat. Originally from Spain but living in Indiana, she is a language teacher at Franklin, a liberal arts college. She was in Antigua with a group of students doing language classes and a study of fair trade coffee growing. She told us of a boutique hotel where she and colleagues were staying, and we were we were easily convinced to follow her to very comfortable accommodation. We’ve ridden 1,800 km in five weeks, dealt with unaccustomed heat, intestinal problems, and steep roads. The weary old bones need a few days of pampering. Antigua seems a good place to rest in a verdant courtyard. 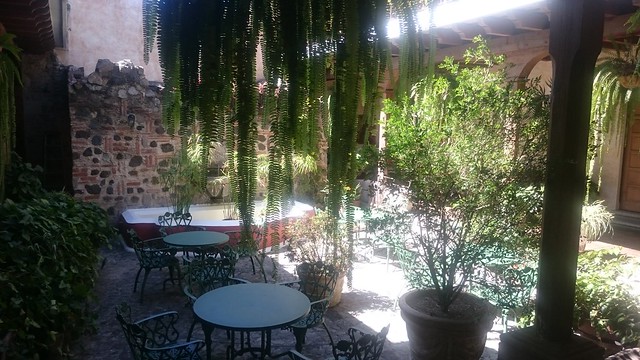 Our courtyard for a few days of rest

An aside by Chris:

Our tree house and the spring below it mark a sacred Mayan place, according to Gerardo. From this spot, using the two volcanoes on the opposite side of the lake and objects in the Milky Way, the stars could be studied and astronomical events predicted. In particular, the Milky Way aligns with one peak at the summer solstice and the other at the winter solstice, so this place was akin to Stone Henge for the Mayans.

Also the tree house has proven to be especially stable in recent earthquakes!

3 responses to “Lago Atitlan to Antigua”