2017/01/17: La Democracia 106 km.
There was a short climb after leaving Comitan, then a fantastic sweeping downhill from the Chiapas highlands to the border. You could see the sharp peaks of the Guatemalan highlands ahead, and we knew we were in for some tough climbing. We stopped at a last Mexican gas station, and used up our peso coinage on Coke and salted peanuts, then it was upwards to the border, with nothing to do upon exiting Mexico. There was a passport stamp to enter Guatemala, and reasonably straight exchange of remaining paper pesos to quetzals with an eager fellow. 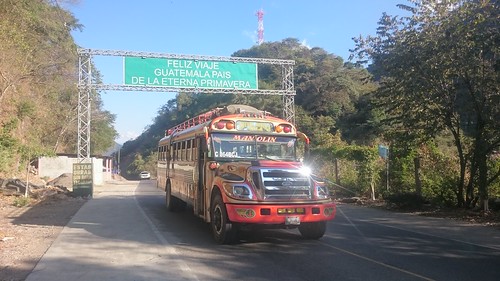 “The land of eternal spring” but it feels like mid-summer with eternal chicken bus fumes to us.

We pushed our bikes up the crowded street of market stalls through La Mesilla – the border town – stopping first for ice cream, then a SIM card, and a bank machine. We continued on the Panamericana, almost devoid of shoulder, getting used to the careening chicken buses that belch black diesel fumes. These are buses decked out in chrome and garishly painted both with route information and evangelistic exhortations. They careen to a halt when a prospective passenger is spied, and any luggage is hurled into the rack above as the passenger leaps aboard. Young men secure the sacks as the bus accelerates, and we see them descend the ladder and enter the rear door even as the bus has reached full speed. Guatemala has a grittier feel than Mexico, and we’ve moved down several steps in air quality, but people seem ready to interact with us as fellow human beings more than has been our experience to date.

We rode for about 15 km and found a motel where we had a caldo, a delicious bowl of stew with chicken, rice, vegetables, and melting cheese. Carlos the waiter peppered me with english vocabulary questions. I wrote out phrases and later introduced him to DuoLingo’s English for Spanish speakers. 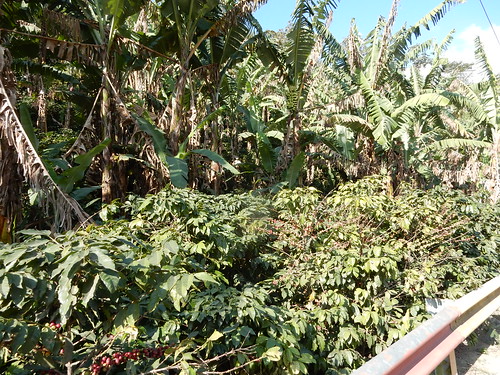 This is coffee country. Here it is shade grown under banana trees.

2017/01/17: near Huehuetenango 68 km.
This day took us from 810 to 1900 metres elevation, with various descents so that we could climb even more. We had contacted a Warmshowers host in Huehuetenango but not heard back, so we continued past the turnoff and dropped into simple digs with a comedor next door. 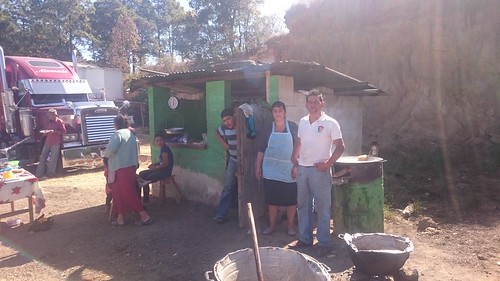 Free second breakfast of fried pork and tortillas was given to us by this cheerful couple. We bought candied pumpkin from them. It made a good road snack.

2017/01/17: San Francisco en Alto 72 km.
Another climbing day. Whew! As we paused at the roadside to drink water, three women appeared from the woods with their sheep. Nearly everyone is indigenous here, and most wear traditional dress. I complimented the women on their clothing, they agreed to have Chris take their photographs, and they seemed to enjoy seeing them. 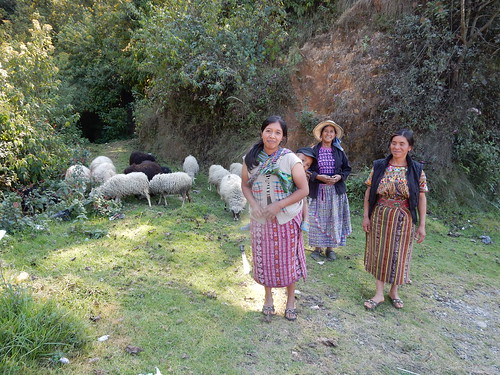 We knew there would be accommodations in San Francisco en Alto, but were not expecting the 100 vertical metre climb up cobbles at a 20+% to the town’s centre. The town seemed to specialize in the sale of fabrics. We’ve seen many women weaving with lap looms, and it reminds us of the mountain area of Laos that we cycled through in 2009.

2017/01/17: San Marcos de la Laguna 70 km.
We found ourselves walking our bikes down the steep streets through the narrow space left by the host of market stalls that had appeared. Sellers asked where we’d come from, I told them, and they relayed our details ahead! I could hear “They came from Cancun by bicycle” as we made our way downward back to the Panamericana.

We climbed to 3000 m elevation at a village called Alaska, crossing the spine of Central America at one of its highest points. We turned onto the smaller road toward San Marcos de la Laguna, where we had heard we might find peaceful respite on the shores of lake Atitlan. Our progress was slow as we waited behind a Tz’utujil Mayan funeral procession making its way through a village, with walking mourners proceeding ahead, the colourful coffin in a pickup truck, and boys cheerfully dangling their legs off the last vehicle just ahead of us. The descent of over 1500 m in the last 20 km was beyond anything we’ve seen in terms of steep gradient and poor surface. We stopped half a dozen times to cool our rims.

Arriving in San Marcos, we realized we’d found our way onto the Lonely Planet Trail, but also that perhaps we didn’t have enough piercings and tattoos to fit into the central scene. We found quiet lakeside digs on the outskirts of town, and moved into a simple treehouse from which we could watch hummingbirds and bees. 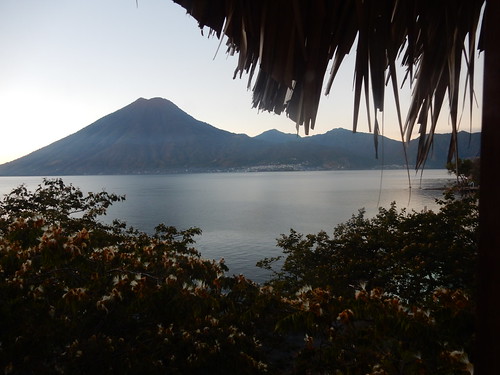 View from our treehouse across Lake Atitlan

2017/01/18: In San Marcos de la Laguna
Chris lay awake worrying about our lack of cash, and about how on earth we’d get out of San Marcos. (We later learned that only one person is known to have ever cycled out out of San Marcos, and that was on an unloaded bike.) At 4:00 a.m., he slipped outside and crossed the 10 m from the treehouse to the earth mother loo building, wearing only his undies. Sleepily, I decided to follow him, and saw no need for any clothing to travel only a few steps in the darkness. No sooner had I descended the rustic steps from our perch, when I heard the door slam shut behind me. Our key was inside.

We were locked out of our room. Chris was wearing undies. I was completely naked.

6 responses to “First Days in Guatemala”