Merida gave us a good farewell with a lively reenactment of a Mayan ball game on the eve of our departure. Since then, we’ve been rolling south and a little west, riding only in the mornings, staying mostly indoors in the afternoons, and exploring our surrounds in the evenings. We took a day off in Campeche, a city fortified against pirates, and since then the roads and terrain have begun to have more interest. 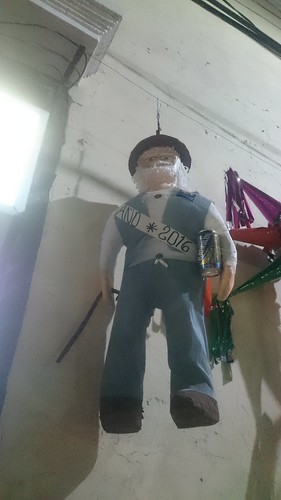 Old Man of the Year

Our ride through villages early on New Year’s morning showed us the aftermath of festivities that include burning an effigy of the “old man of 2016.” Sometimes these are filled with firecrackers, for added excitement.  In some towns the lads were still drinking, and in others women and older men were busily tidying. Along the coast road from Campeche, we saw fishermen spreading basket loads of small fish to dry on cement slabs. Greedy pelicans waited for spillage as baskets were lifted off the boats. 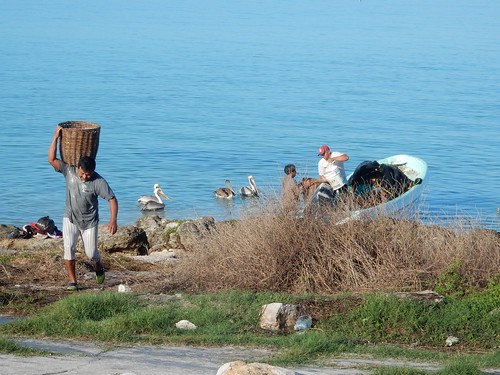 Bringing in the fish under the watchful eye of the pelicans 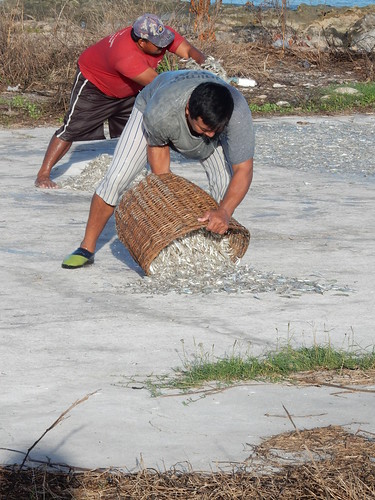 Spreading out the  Anchovies?  on concrete.

From Tenosique we took a taxi to the ruins at Moral Reforma, and wandered quietly for about an hour. We were the only ones there, and according to the register we were the first visitors in several days! These are relatively newly discovered, and barely developed. There was little information, but the solitude was pleasant. 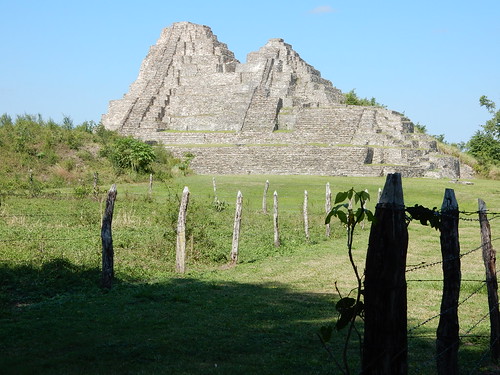 Peace and some shade at Mayan site

Riding only in the mornings, we haven’t covered huge distances. We’re taking a day off here in Palenque, however, having altered our planned route.  We are in relative luxury in a Best Western, with the first bed since Cozumel where the bottom sheet actually stays in place. This morning, we took a collectivo (public mini bus) to the significant archeological site, and were the first to enter when it opened. We headed back to town as the tour buses began to arrive, and settled into a café for coffee and second breakfast, and a friendly chat with a thoughtful woman from North Carolina. 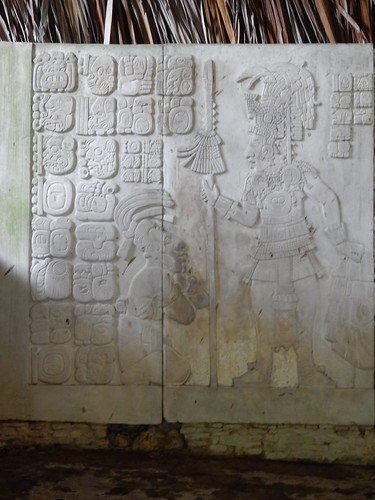 Palenque is famous for the quality of the artwork found. 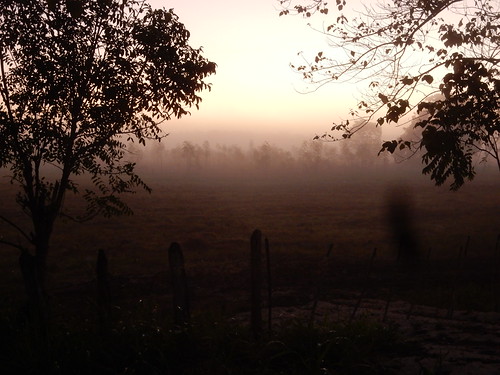 Mist over the fields at dawn

We’re now in Chiapas which is ranching country. Yesterday we did a 20 km stretch on dirt road, and at a Coke and chips stop in a tiny village, I chatted to senora’s brood of kids, asking their ages. Their response was accompanied by lots of giggles. As we got ready to leave, the small girl came out to us bearing a gift of four large oranges. Further on, we neared the junction with the main road to Palenque and a youth rode abreast of me on his motorbike and chatted at length. He was on his way to work in town, though I was unable to ascertain what he did. Arriving at our hotel, he greeted us enthusiastically as our bell boy, helping to store our bikes in the left luggage room. 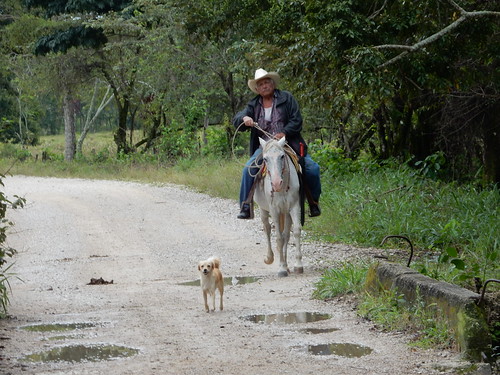 We see lots of guys on horses as we ride. 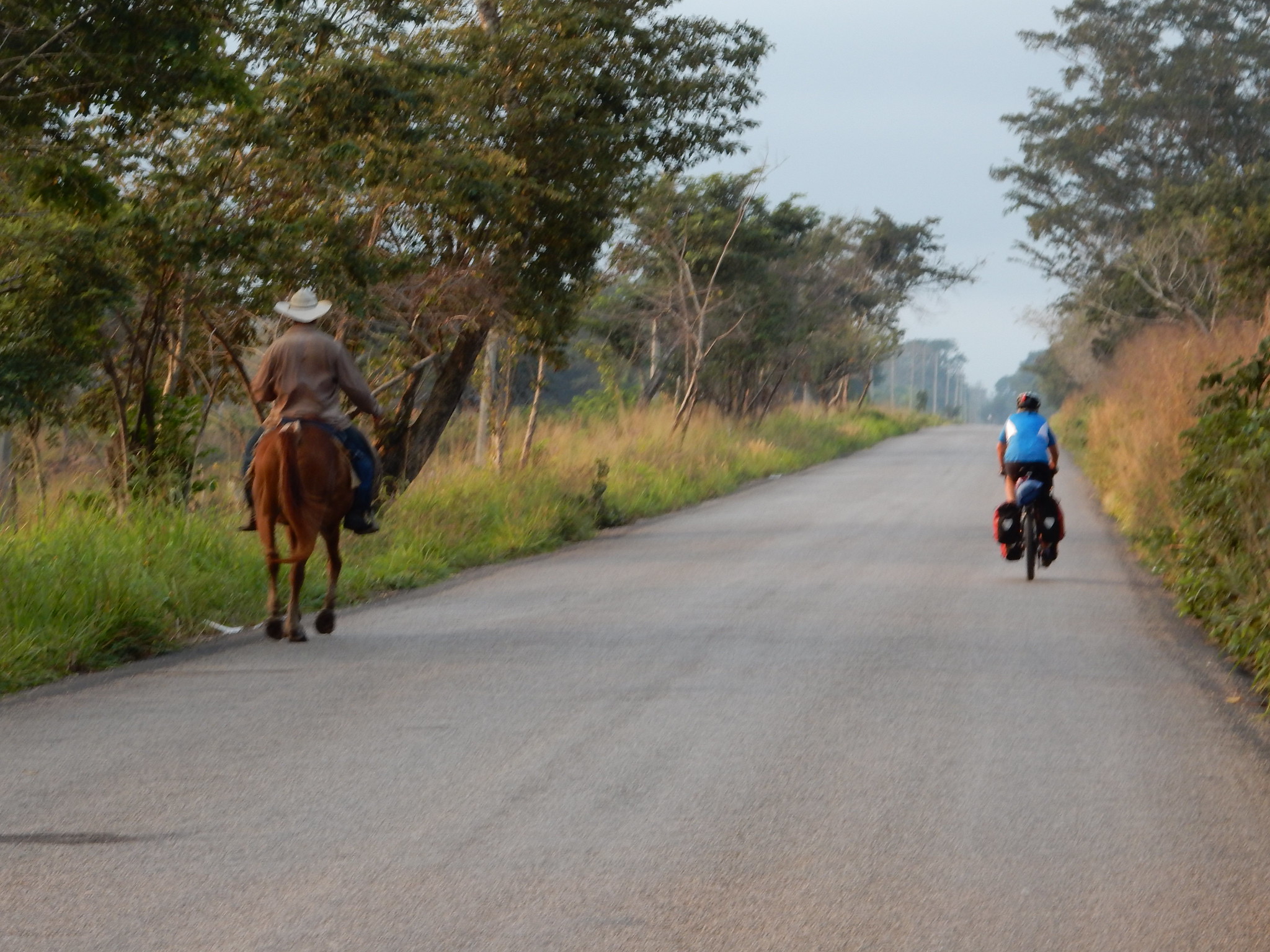 In this terrain we are faster than horses 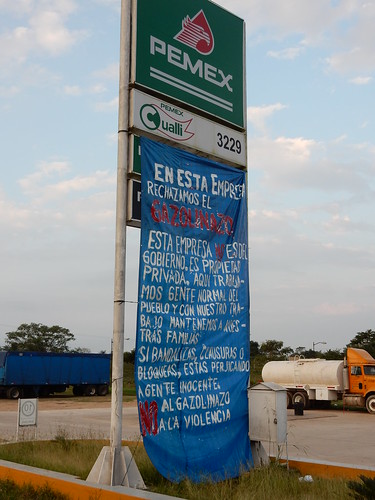 We have been seeing a very different view of the gasoline riots in Mexico.

Making our initial plans we didn’t know we would get hit by a heatwave. Cycling at 32 C in the midday sun on the west side (shadeless) of the road is only for “mad dogs and Englishmen”. Geographically we are now able to head into the mountains and take advantage of two things:

Our plan A route had us going to various major pre-Hispanic sites. But these were all at low elevations because important historical places tend to be on waterway-based trading routes. Reviewing our new route we still find things of historical interest, but chief among its appeals is riding winding roads that respect the terrain. We are also switching to a route used by a young U.K. family cycling with their two young sons a couple of years ago. This provides us with our primary assurance of the safety of this new route.

4 responses to “Merida to Palenque”