This has been a week of adjustment from the resort to the road experience. There have been physical and mental challenges, but we’re easing our our bodies into the new routine by rising early to start pedalling at dawn, then stopping by noon when possible. Our daily distances are relatively short, which isn’t a bad idea for old bodies at the start of what may be a long trip in a challenging climate.

The first day took us down the busy coastal road to Tulum, where we walked to a spectacularly situated fortified Mayan trading post – strategically placed for traders who paddled canoes inside the protective Meso-American barrier reef. At a gas station on the road to Coba, we crossed paths with a pair of German touring cyclists heading south via Belize. We were both under the weather as we slowly walked through the ruins the next morning, especially Chris who sat in the shade rather than climb the pyramid.

We’ve been on long straight roads that make for rather boring cycling, but we think this will change fairly soon. The further we get from the Mayan Riviera, the more relaxed and friendly our interactions at roadside food and drink stops seem to have become. Our ride to Valladolid was punctuated by a couple filming us from their shiny new pick up truck as we rode, then stopping to film us again as we passed them. They called out Feliz Navidad as they drove off, to which I replied Buen Año y prosperidad.

We cycled on to Valladolid, checked into a modest hotel and rested before walking around the colonial town during cooler hours. We had a mid-afternoon meal in something like a food court, where fellows at each food outlet would beckon by calling out and urgently waving their menus as if to summon us. At first I thought I was being especially targeted as a foreigner, but we quickly realized this was standard practice, as was the whisking away of our plates the second we’d finished eating our cochinilla pibil – pork on a bun – with meat that has been marinated in sour orange juice and slowly roasted. We notice that boys or men in this bussing role, in Valladolid and elsewhere, all have red cloths tucked into their belts. Your plate is literally snatched once you lower your fork after taking that final bite, and the table is speedily wiped with the red cloth. We had noticed the surprising speed of plate removal at the resort, too. Speed-of-light table clearing must be a Mexican custom.

Ceramics for sale at Chichén Itzá

From Valladolid, we rode to Chichen Itza – probably the biggest and best known Mayan site in Mesoamerica – and left our loaded bikes beside some motorbikes under the watchful eye of the man in the parking parking lot booth, and tipped him beforehand for his efforts. He accepted this, but didn’t seem to have expected it. Chris called it well worthwhile for the peace of mind, as we strolled from huge pyramid to ball court to sacrificial cenote before the busloads from Cancun arrived. The local Mayans have the right to sell handicrafts inside the site, but it was early enough that they were just setting up their tables. 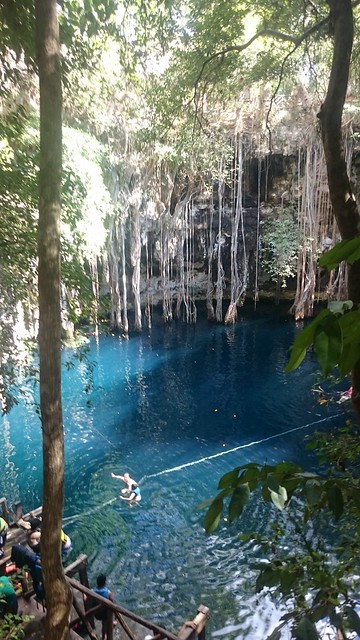 We rode on to one of the many cenotes that dot the Yucatan peninsula. These are freshwater- filled sinkholes in the karst limestone, and some are connected to underground rivers. I had read that as cenotes were used by the Mayans for practical and spiritual purposes, they were now managed for recreational use by local Mayans. I haven’t learned to distinguish Mayans from other Mexicans, but I think two seated matriarchs fulfilled the role of oversight, while others sold tickets, supervised swimming, and manned a zipline across the cavern for a few shrieking teenagers.

We were fitted with “obligatory” life vests and descended about 30m of rocky pathway and slippery ladders to a poolside platform. I was floating happily in the 24 degree water, as I learned the word for “skinny” by chatting to another woman about how long Chris was taking to immerse himself. I knew that fat was gordo so I asked for the opposite, and we giggled about Chris being flaco.

Our cenote swim was magical! We were almost alone when we arrived. Below us was an endless depth of aqua water, and fern-draped walls of strange rock formations rose to the opening above. Long roots hung down, and small fish darted about. Then a few groups arrived, including some Aussies. A small boy jumped in and shrieked in horrified surprise “Mama, ay pesces!!!!” Everything echoes. And yes, there are fish.

After swimming, we ate in the Mayan restaurant and pitched our tent on a tent platform above. We started cycling at 7:00 this morning, reaching Izamal where we found a very relaxed hotel with a courtyard where we plan to spend a quiet Christmas Day.

8 responses to “Hitting the Road ”