“That looks like an adventure!” commented a woman in Langford, just west of Victoria, BC, as she noticed at our loaded bikes parked outside the Subway sandwich shop. I had been feeling disappointed that our summer bike touring plans had been limited to a relatively short local ride, but her comment reminded me we would still have our share of joys and challenges. 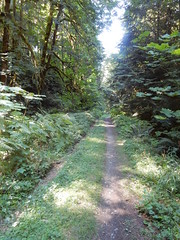 A host of commitments had prevented us from leaving for a longer or more distant summer tour, but we finally got away for Southern Vancouver Island and the Gulf Islands. The car stayed at home — always a good start to an adventure. In the wee hours we rode to the Skytrain and took transit to Tsawwassen ferry terminal. After crossing to Swartz Bay, we rode to Sooke on the Lochside and Galloping Goose rail trails, where we were welcomed and fed by old friends. The next day took us along the hilly southwest coast of Vancouver Island, and we camped at Fairy Lake recreation site where one of us dislodged sweat by swimming. From there we climbed on a paved logging road to about 380 m, and descended to Cowichan Lake. We rode eastward on a rail trail that roughly followed the Cowichan River, and leaving it to head into Duncan we crossed Cowichan First Nation land. All traffic was stopped for some time while a burial took place. We quietly gorged on roadside blackberries as we waited to proceed. 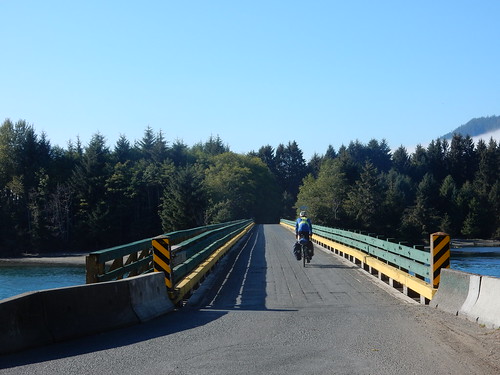 We fell into a hotel in Duncan, and had a snackish supper in our room because we’d eaten a huge lunch in Cowichan Lake. The next morning, I bought new pedals at the local bike shop, since my recent efforts to overhaul aging pedals seemed to have failed, as proven by the return of the water torture clicks. Note: Any tips on prolonging the life of SPD pedals would be appreciated, because I seem unable to make a pair of Shimano XTs last more than two years.

We rode north to Ladysmith, and had two nights and a really sociable rest day catching up with friends from an early era of our lives together. Why do we leave these things so long? The morning of or departure was marked by George the tabby cat leaving a headless baby rabbit in the bathtub as a token of his respect for us.

We crossed to Saltspring Island at Crofton, and rode to Ruckle Provincial Park where we spent two nights and a lazy day. From Saltspring we hopped by ferry to Galiano, with a plan to reach Dionisio Provincial Park at the northwest end before dark . Part of the appeal of Dionisio came from the fact that a land dispute has led to gating the access road, so it can now only be reached by boaters –or by cyclists who nip under the gate. We were looking forward to a tranquil night as we turned off onto a quiet road. Then I had a flat. We shifted into our standard routine of removing the tube for inspection, and found its seam had split to create a hole that proved impossible to patch. We unrolled our spare tube to find it too had a split seam that left an even larger hole. After several hours of fruitless patching efforts, we returned to the main road and humbly stuck out our thumbs. Within two minutes, a minivan stopped. We were expertly helped to load our bikes into it, and found we’d been rescued by the kind proprietor of Galiano Bicycles, who sorted us out in her well-equipped workshop, and let us collapse into our sleeping bags in her guest cottage. We counted ourselves as truly fortunate and are very grateful to Pam. 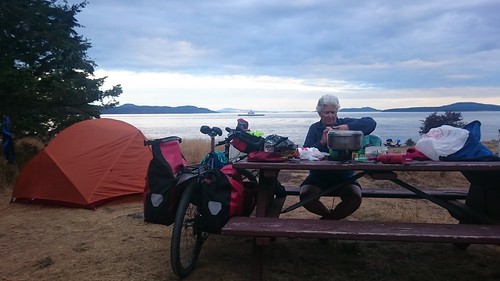 We ate a leisurely breakfast at a local café before boarding another ferry to Pender. Despite failings of the GPS, we finally arrived at the house of a friend we’d made during our 2010 ride down the US West Coast. He and his family welcomed us warmly and fed us well, and gave us a glimpse into lives lived in an island community. After a walk to a spectacular viewpoint followed by a great swim the next day, we departed for the ferry, eventually reaching Tsawwassen at dusk. We took transit into the city, and I felt almost serene as I glided through dark and quiet residential streets from the Skytrain to home. There is a satisfaction to both leaving home and returning to it under one’s own steam. 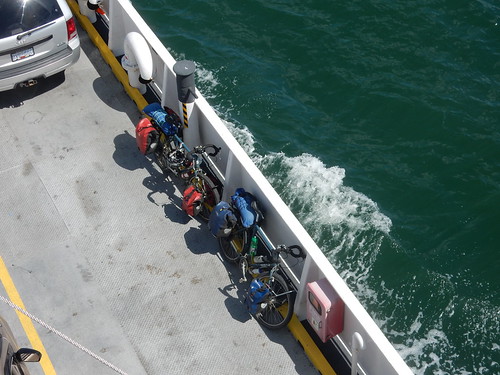 Our bikes on the car deck of a BC Ferry epitomize this trip.

This entry was posted in Bike Touring, Vancouver Area. Bookmark the permalink.

One response to “A Local Ride”