March is the prime ski touring month in Norway. The days are getting long enough for relaxed travel from hut to hut, the snowpack has settled, and many of the routes have been marked with birch wands which help with navigation during whiteouts.

Last year, feeling that only a week of skiing wasn’t enough, we signed up for two separate one-week tours. This allowed us to have a week of rest in Oslo between tours, but it also meant more travel time in relation to skiing time. This year, we signed up for the Norwegian Trekking Association’s two week “Long Tour”. From its difficulty rating, we knew it would be more challenging than what we’ve done before, both in terms of daily distances and in terms of consecutive skiing days without a rest day. We committed to the trip before Christmas with great plans to work on our fitness, though we didn’t follow through on these as we should have.

It was tough, but it was wonderful. Conditions early in the trip were perfect, and then temperatures rose to give us a few days is slushy snow and breakable crust. The last few days involved icy conditions, and our conversion to carrying universal klister.

One of many glorious descents (image courtesy of Knut)

We were eight participants and two volunteer leaders. Albert and Charlotte led in different ways that complemented each other well. I found it reassuring knowing that Albert — with his enormous pack– was behind. The Norwegian contingent included Paul, Knut and Arild; the Seattle contingent was Josh and Tiva, and Per was the indefatigable Dutchman who we knew from our Huldreheimen trip last year.  Only three of the ten of us were under 60, and our determined Dutchman was past 70. We’ll be proud if we can tour like Per in another decade! 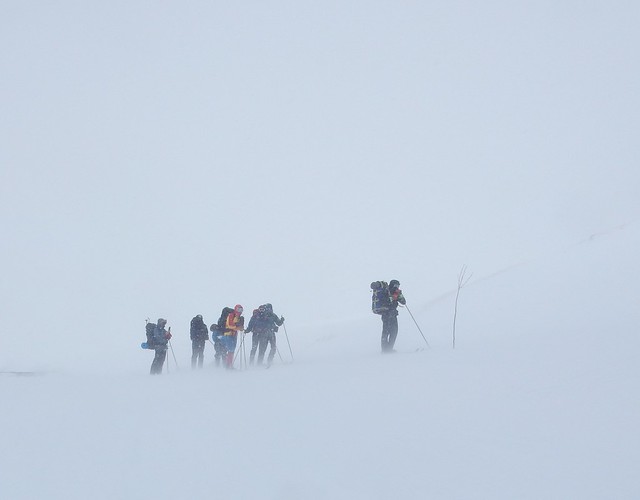 Paul tracked our progress with his GPS, and each evening we would try to guess our exact distances and climbs before he announced the precise answer.

Finse is a small collection of buildings at the highest point on the Oslo to Bergen rail line. There is a hotel, a large DNT hut, and of course a railway station. There is no road access; the village exists to service fjell skiers and hikers. As we emerged from the fog on our final descent, a train sounded its whistle as it shot out of a tunnel into the station. Judicious braking was required before skiing downhill over the tracks to the lake. 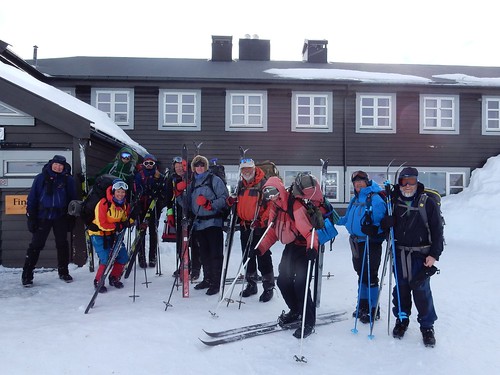 By the end of the tour, we knew each other well and the atmosphere was especially relaxed and friendly when we cheered our leaders with a rousing rendition of “We All Love the Leaders of the Tour”, sung to the tune of Yellow Submarine in the busy lounge area of the Finse Hut.

What’s next? With a system of over 500 huts in Norway, the possibilities are endless.

5 responses to “Jotunheimen and Skarvheimen”