The Nass Valley to Terrace

2015/09/15-18: Nass River to Terrace, 160 km
and train to Prince Rupert
We trundled another 30 km or so on good gravel, and arrived at Gitlaxt’aamiks, formerly known as New Aiyansh. Hungry for a change from liverwurst on Ryvita, we turned in to the largest of four Nisga’a villages. Gitlaxt’aamiks sports a modern government building with new totems in front, and three flags flown: Canadian, BC, and Nisga’a. We were in the Nass Valley, home of the Nisga’a people who in 2000 brokered the first treaty with the federal government in over 100 years. 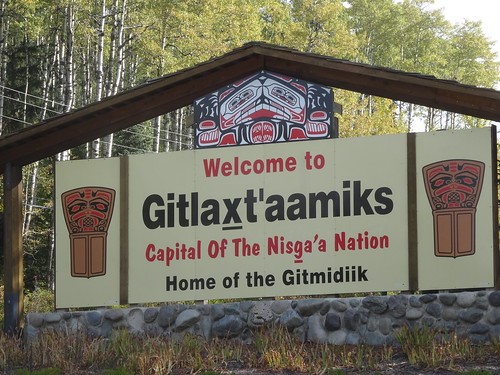 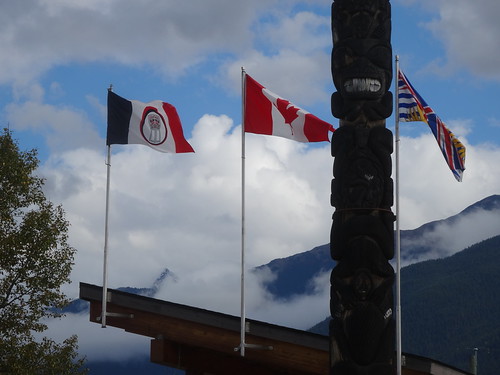 Inquiring about eateries, we were directed to a small red and white cabin for good burgers. We have no photos of this very modest establishment, but we had to walk carefully around rusting vehicles and litter to enter it. The welcome inside was warm, and as we waited, a lively woman entered and didn’t hesitate to accurately parrot Chris’s English accent. It turned out she was the Nisga’a language teacher for K-6 at the village school, having learned the language during summers spent with grandparents. It was in fact her voice I had heard on the language portion of the Nisga’a web site, and she seemed pleased I’d explored the site and at least attempted a Nisga’a greeting. We were introduced to nieces and grandchildren who traipsed in and out, and to another language teacher who told us of her family’s salmon smoking, and showed us examples of the pine mushrooms she was collecting. They are graded into one of four grades, and the highest grade fetches $12.50 per pound from local buyers who sell them fresh on Granville Island, or dry them for export to Asia. 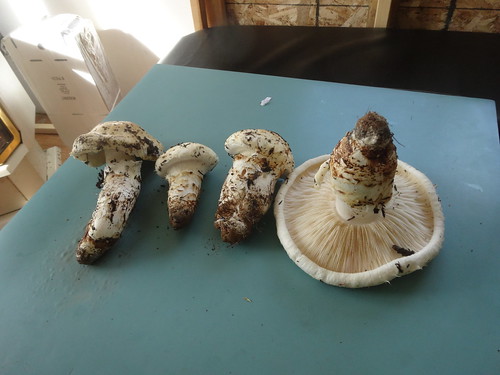 Turning south from Gitlaxt’aamiks, we passed the vast lava beds created by an eruption which occurred only some 300 years ago, and whose devastation of two villages lives on in Nisga’a oral tradition. We’ve never seen anything like the expansive jumble of rounded pumice rocks, each covered in pale lichen! The pieces are unstable and the pumice is sharp, so walking any distance is hazardous. 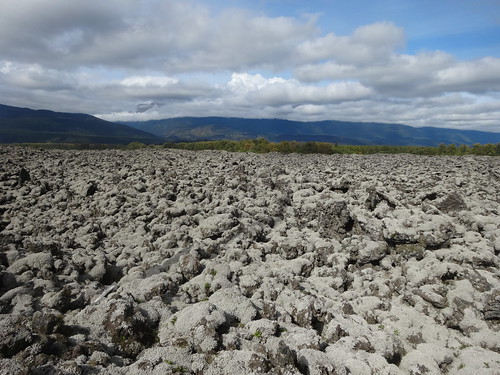 Still hoping to catch the Friday ferry from Prince Rupert, we pedalled hard to Rosswood and on to a user-maintained provincial campsite on Kitsumkalum Lake. When a local returned from a beach stroll and warned us of “fresh grizzly tracks”, we moved our tent nearer our only fellow campers, and we introduced ourselves to them in case nocturnal disturbances sent us diving into the protective embrace of their camper. Spawned-out salmon carcasses lay on the beach, and these are easy food for bears. We hoped any bears would stick to salmon, and not bother to reach for our food. 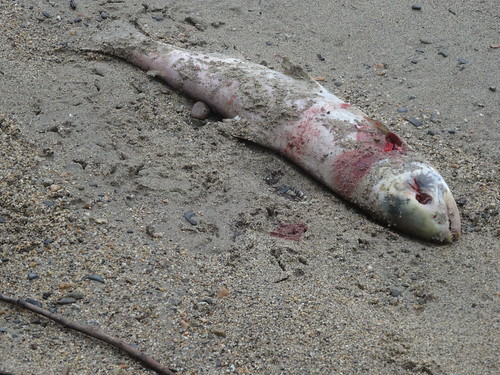 Next morning, after a night of listening for approaching bears, we pedalled to Terrace and dove into Boston Pizza. The young waitress looked at our grey hair and offered us “half portions” of pasta, but we made quick work of full bowls. Still trying to rid my bike of noises, we bought new jockey wheels at a bike shop. We might have pedalled westward along the Skeena to Prince Rupert, but we gave into our bodies’ demands and checked into a hotel for laundry and a good 15 hours sleep. 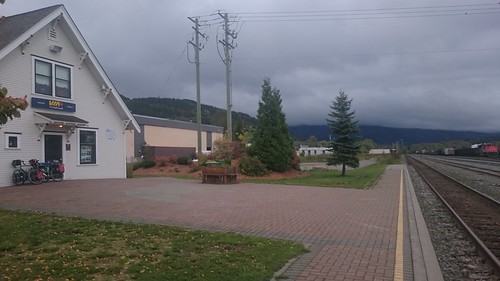 The following day we whiled our time in an excellent coffee shop, and come evening we boarded the train for Prince Rupert. We disembarked along with a German tour group who’d travelled in a private observation car, and we pedalled in the dark to a backpackers’ hostel.

This entry was posted in Bike Touring, Canada, North America, Whitehorse to Vancouver. Bookmark the permalink.