2015/09/1-5: 420km
After a sociable weekend with Yukon friends, we departed a day later than planned. It was sleeting, and we wore heavy mittens over our gloves. If a tailwind hadn’t been driving us forward, we’d probably have turned back after only a short distance; surely nobody in their right mind would do this for fun? At a rest stop, we were invited into an RV for coffee, and later a car stopped and the driver presented us with a huge bar of chocolate. We were encouraged by the friendliness of the road, but we hoped not to camp till the weather improved, so we soldiered on to the motel at Johnson’s crossing. Unfortunately, their hot water heater was out of order, so we were out of luck for evening showers.

The next morning after breakfast, when we learned the hot water was back on, we made joyful use showers before riding on to Teslin for a buffalo burger lunch. As we paid our bill, I overheard the weathered waitress discussing how much RAM her hard drive had. You meet an array of colourful characters in northern outposts, and they often have an eclectic collection of skills. Shortly after lunch we stopped to replace two bolts on Chris’s rear rack that was sitting at an unhealthy angle, then rode on to a simple recreation site at Morley River, and we watched mergansers swim by before we cooked supper. 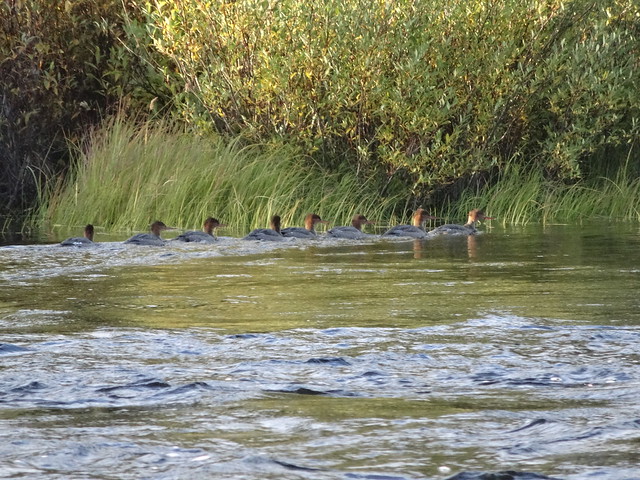 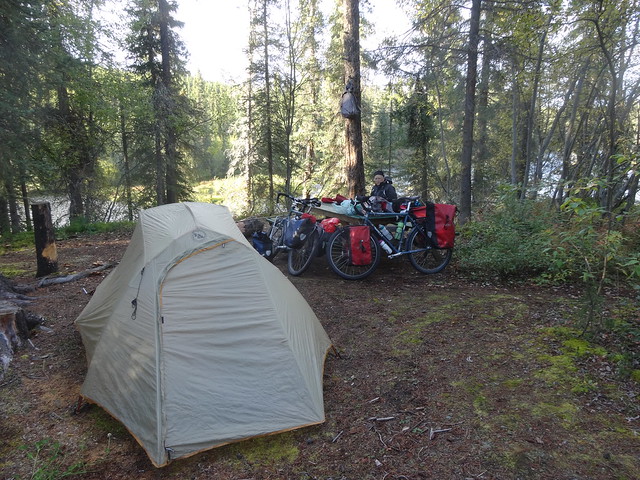 The following day took us over the continental divide between Yukon and Liard (Mackenzie) drainages to Rancheria Falls, a pretty site recommended by our chocolate provider. We cooked alongside some Virginians, and camped in the picnic shelter while temperatures fell below freezing that night. 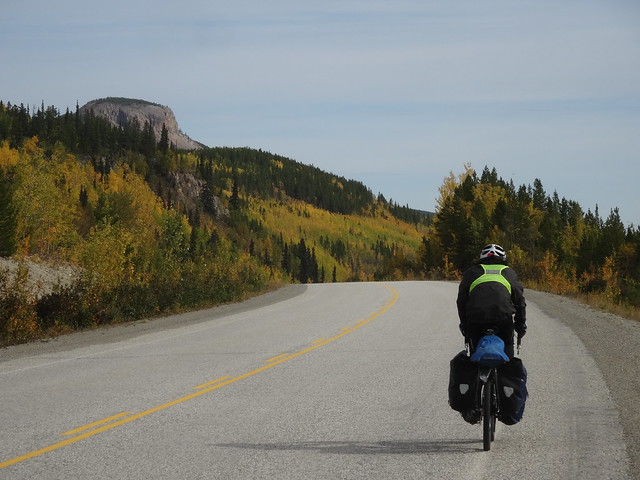 In the morning, we met a Japanese fellow who had ridden his folding bike south from Inuvik, toiling under a large backpack. We passed each other a few times, and it became clear — when I came upon him from behind without sufficient warning and nearly gave the poor man a heart attack — that he was mortally afraid of bears. He had seen several grizzlies on the Dempster Highway.

We found a cafe at Rancheria, and never passing up a chance to eat and make our carefully packed dried food last a little longer, we dove inside for a second breakfast. Asking for the bill, and having come to expect “northern” prices, we found we were charged only $10 for two hearty meals and an extra coffee we’d offered the Japanese guy. The friendly and generous manager insisted on giving a big discount to cyclists, and we doubted what we were permitted to pay covered the cost of ingredients. We camped in a pullout just west of the junction with the Stewart Cassiar highway, and hoisted our food as well as we could. 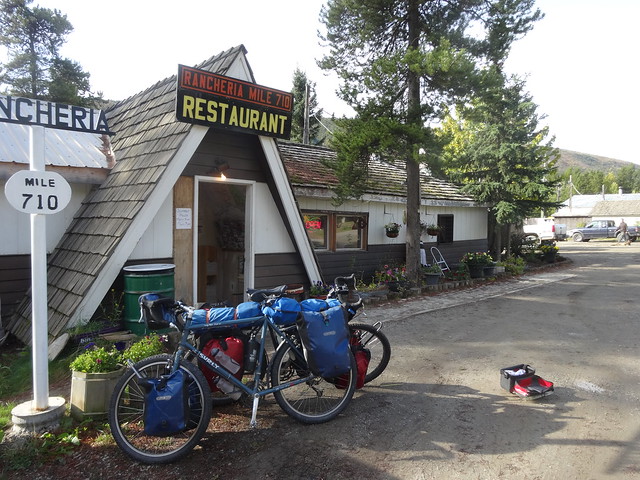 Next mid-morning we rolled into the RV park, cabins, and tacky souvenir shop that calls itself Nugget City, only a kilometre from the start of the Stewart Cassiar, and decided to collapse into a cabin for rest and an evaluation of Chris’s Achilles’ tendon problem. We’d ridden over 400 km in just over 4 days, and the old bodies were begging for a break. Dining at the cafe that evening, the cook-waiter talked a mile a minute to anyone who would listen. He seemed to be full of bravado and sensationalist misinformation. He’d worked full tilt – fourteen hour days, seven days a week –  for the past three months, and now that the summer season of migrating RVers was tapering off, he was in some sort of wind down mode.

After online reading, we tweaked the position of the cleats of Chris’s shoes so as to reduce Achilles strain.  Looking back, we feel the main cause of his tendon pain was a rather fast start to the trip after very little time spent cycling in prior months.

One response to “The Alaska Highway”