Kayaking in the Broken Group

Our German friends Carsten and Jackie said they’d like to do some kayaking during their Canadian visit. The Broken Group Islands in Barkley Sound immediately came to our minds as a destination because  we’d been there fifteen years earlier with our kids — then 15 and 12.  Even though it made for tight logistics as we prepare for another bike trip, it didn’t take much for us to convince ourselves that we should go along as their personal guides. Wasn’t it our civic duty as West Coast hosts?

It was a fabulous trip; sea birds, dolphins, seals and sea lions appeared on cue, and we watched a mother bear and cubs grazing leisurely about 15 metres away! This last was back at Sechart, after we’d returned the rented kayaks and were waiting for the Frances Barkley to take us back up the inlet to Port Alberni. 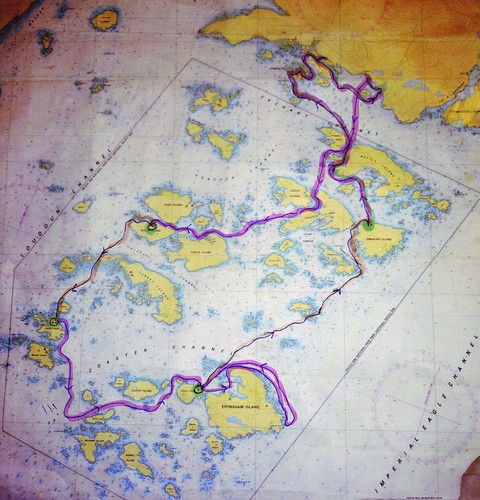 Route for five days and four nights, as drawn onto a scan of nautical chart with great precision by the self-appointed chief navigator. Exclamation marks indicate the adrenalin zone.

Our first night was spent at Willis Island, where we quickly fell into a routine of unloading double kayaks and hauling them out of reach of the highest possible tides. On the second day, a rainstorm began as we set out for Clarke Island and Jackie was in the early stages of hypothermia as we arrived. We set up a tarp and prepared hot drinks while she changed into dry clothes, and soon the skies cleared as we watched deer graze calmly near our tents.

The  third day we teamed up with Jason and Ashton and headed toward outer island Wouwer in the hopes of inspecting a sea lion colony, but discretion became the better part of valour once we got into swells several metres high. With relief all round, we retreated to a more sheltered route toward Gilbert Island. In later discussion we agreed we’d all been beyond our comfort zones for for a good fifteen minutes. In hindsight, I had felt a dose of adrenalin that was a bit like the WHEEE factor I get from going downhill on a bike at over 50 kmh. The chance of tipping was getting pretty high, and the consequences could have been severe.

Driftwood fire at the beach

From our camp at Gilbert, we did an out and back tour to inspect caves and arches along the north coast of Effingham. The fourth day took us past rocks and islets. This was the day we saw a group of half a dozen pacific white-sided dolphins, a seal hauled out on the rocks and more. We arrived at a crowded Gibralter campsite, where youthful kayak guides sliced bagels for a group of codgers about our age who were out for the day from the comforts of the lodge at Sechart, probably having been dropped off nearby by a kayakers’ launch taxi. We felt infinitely superior, of course, as we opened tins with a swiss army knife to prepare our last gourmet supper. We were also damp, smelly, sunburnt, and gritty with sand, and a little reluctant to wrap up the trip the next day.

Right on cue for German tourists

On our final day we wound our way through the Pinkertons, a tiny group of islands just west of Sechart, and poked into bays before finally landing to unload our boats and place gear back into cargo boxes for loading onto the ship. As we waited for the boat, the lodge manager quite calmly announced, “Mother bear and cubs!” We watched the trio calmly graze about 15 metres away before boarding the old packet steamer and chugging off up the inlet.

Is it a sand piper ? Bird experts please comment. (It screeches loudly)

This entry was posted in Canada, Paddling and tagged British Columbia. Bookmark the permalink.

3 responses to “Kayaking in the Broken Group”