2014/03/8-13: Jotunheimen and Filfjell
We found ourselves in Norway in March to help celebrate a convergence of birthdays. The skiing was great, too. We’ve found another satisfying way of “wandering.”  There are various ways to propel oneself through a landscape, and the mode should fit the terrain and the season. In the mountains of Norway in late winter, skiing on Nordic back-country gear from hut to hut is ideal. 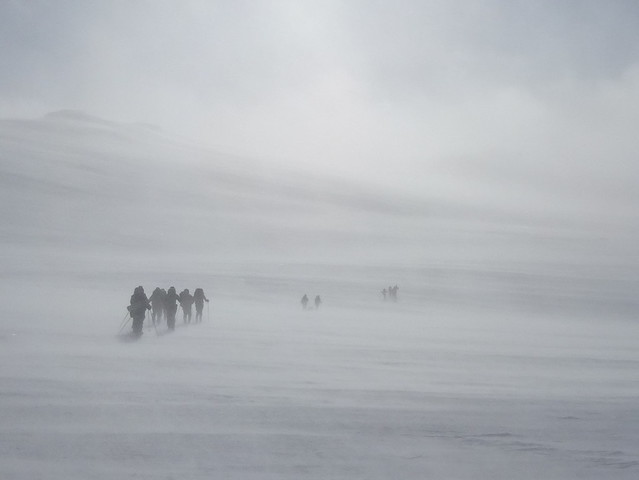 Where is the horizon?

I trudge on skis across an expanse of white, as gale force winds drive sleet pellets horizontally.  No clear horizon distinguishes land from sky. We are in Norway, part of a group of skiers is heading toward a simple mountain cabin in Jotunheimen National Park.  There is one more pass to cross before we reach shelter, and the wind will likely be even stronger as we climb the ridge.

I have no right to be surprised by the weather. The gear list provided by the Norwegian Trekking Association placed a clear emphasis on wind protection. We all have hoods drawn tight and are wearing goggles, leaving a minimum of skin exposed to the abrasion of ice particles driven by the wind.  We’re above 1000 metres in a tundra zone,  with a maritime effect from the nearby Norwegian Sea.  Temperatures aren’t far below freezing, but navigating in a whiteout is an eerie experience and the strength of the wind is beyond what I’ve experienced in a lifetime of skiing in Canada and more southerly Europe.  No wonder Norwegian explorers Amundsen and Nansen honed their skills here in the fjells; no wonder they led successful arctic forays. 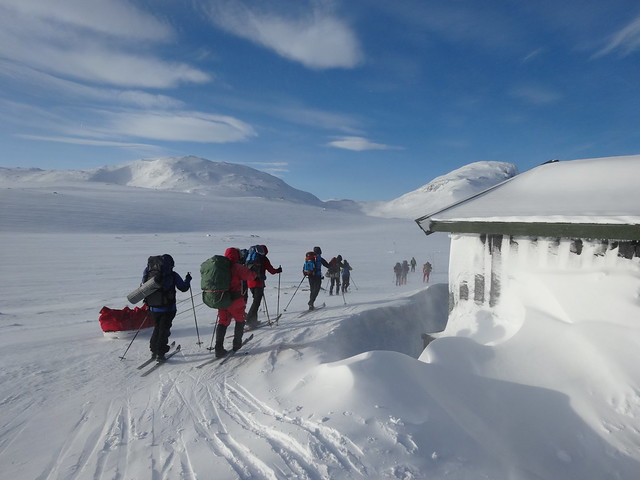 Leaving the hut on the last day

This introduction to an article gives an idea of the weather challenges.

As first timers, we’d joined a tour organized  by the Norwegian Trekking Association. We were twelve skiers, including two leaders. Our group included Norwegians, Germans, Dutch, a Swiss lass, a Scotsman who spoke fluent Norwegian, and a Swedish lass who’d moved to Norway to be closer to real mountains. There was another Canadian in addition to me and Chris. Greg from Sault Ste. Marie was on an extended independent ski trek, having started further north weeks earlier. He arrived at our first hut,  Glendersheim, having spent an unplanned night outdoors due to navigation difficulties. We were early in the season, not all routes had been waymarked with birch boughs, and visibility was limited.  He joined our group for the week, as we were travelling his way. He was hauling a pulka, with his camping gear and supplies.

We were happy to be making use of the DNT hut system, and carrying relatively light packs of about 10 kg each. Our first night was at a serviced hut, where meals were served, showers available, and thermoses filled in the morning with our requested hot drinks. The next two nights were in self-service huts, where we dined on simple fare which we prepared from a stocked supply cupboard: “Joika” meatballs from a tin, mashed spuds from powder, and dessert of tinned peaches once we’d thawed these near the stove. Our fourth night was in comfort at the bottom of a small ski area, and our fifth in another self-service hut. 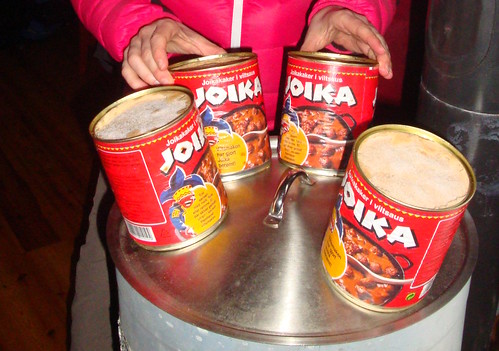 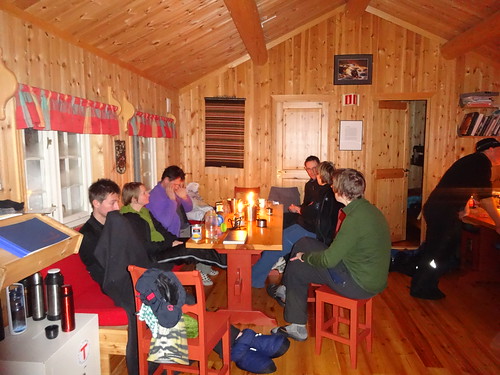 This isn’t British Columbia. The mountains are rounded and the valleys are broad. There is not a tree in sight and nothing to stop the wind. At our lowest points, a few scrubby willows grew in narrow valleys. In broad high valleys, the snow had been scoured away by wind so that heather twigs protruded here and there. Snow conditions ranged from windpack to boiler plate ice. So beautiful. So rugged.

For the most part, we’d brought the right gear, but have fine tuned our choice of skis in preparation for next year’s venture.  With over 400 huts in the DNT system, the possibilities are endless. I’d like to do a longer journey, perhaps some of it independently. Our leader, Svein,  helped Chris hone his GPS navigation skills, an essential tool for progressing safely in weather like we had. 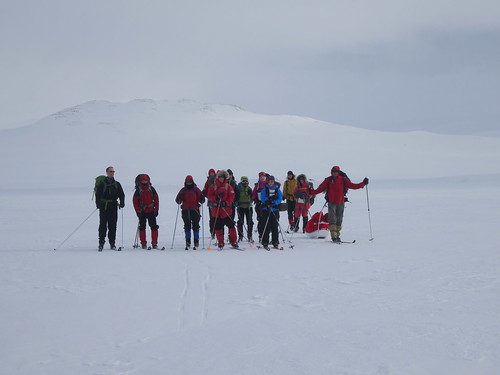 Our group, minus Chris the photographer. Margo is third from left. Leader Svein is taking a turn hauling Greg’s pulka.

Who knows what wanderings 2015 will bring, but till next year, Takk for turen.

This entry was posted in Norway, Ski Touring. Bookmark the permalink.

3 responses to “Ski Touring in Norway”